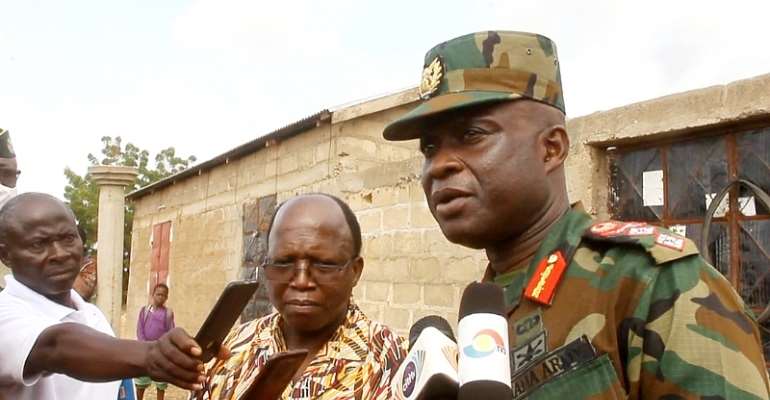 Some borderlines drawn along pillars erected to demarcate the boundary between Ghana and Togo in border towns in the Pusiga District of the Upper East Region are non-existent due to farming activities and erosion.

As a result, Ghana’s neighbor Togo is laying claim to some positions of lands along the two countries boundary line.

This came to light when a team led by the National Coordinator of the Ghana Boundary Commission, Major-General Dr. Emmanuel Kotia engaged a Togolese team led by the country’s Secretary of land Commission, Douti Lardja, in Cinkasse, a town in Togo to find a lasting solution to the boundary line issue.

The Ghana–Togo border stretches over a distance of 1,098 kilometers from the tri-point with Burkina Faso in the north to the Atlantic Ocean in the south. Things recently nearly got worse between Ghana and Togo when Ghana’s authorities attempted extending electricity to some parts of Beelintang, a community in the Pusiga District thought to be part of the country but was truncated after Togolese officials insisted they owned the land there.

At Beelintang, not even the local authorities can tell where the old pillars were erected.

Another bone of contention is the Kolpelig river which is a tributary of the White Volta separating Gariki, a community in the Pusiga District and Kocknorg also in Togo.

The District Chief Executive for Pusiga District, Zubeiru Abdulai, spoke about the challenges his outfit and for that matter, the residents in the area have been having with their neighbors regarding the issue.

The Secretary of the Lands Commission of the Republic of Togo, Douti Lardja, who spoke in French said there is no boundary dispute between Ghana and Togo, hence the need for local authorities to respect the existed boundary lines in order to avoid tension.

He said his outfit and for that matter, the Togolese government will do everything possible to maintain the good relationship between the two countries.

The National Coordinator of the Ghana Boundary Commission, Major-General Dr. Emmanuel Kotia, urged traditional authorities and citizens in communities along the Ghana-Togo border to collaborate with the security agencies to safeguard Ghana's borders.

Major. Gen. Dr. Kotia said the level of cooperation between officials of the commission and those from Togo was impressive.

He noted that the amicable manner in which disputes were settled along the border was in line with the core functions of the commission. He indicated that an educational drive would be engineered by the commission to sensitize residents in border communities on how the boundary pillars can be protected.

Already, a series of meetings have taken place between officials of the two countries in Accra and Lome which is expected to result in a draft agreement and a delimitation plan acceptable to governments of both countries for adoption.