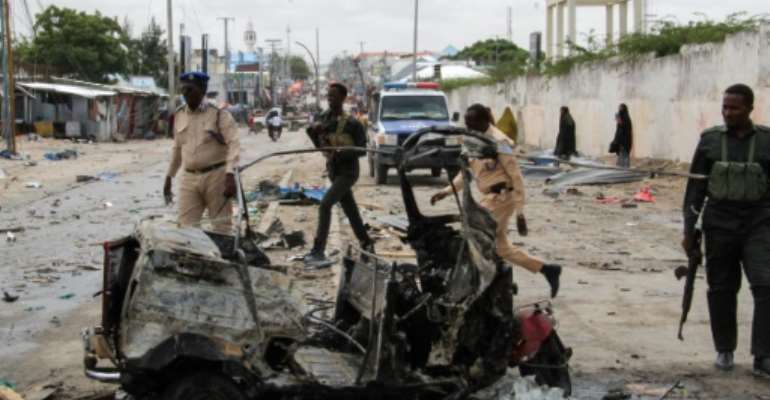 Police officers at the scene of a suicide car bomb attack on July 10 that targeted Mogadishu's police commissioner. By - (AFP)

Somalia's Al-Shabaab jihadists have warned politicians against taking part in elections due to kick off this month after months of deadlock and delays.

Indirect parliamentary and presidential polls are due to open on July 25 with four days of voting for the upper house by state delegates.

"We are sending... a warning to the (voting) delegations," Ubaidah said in a rare message issued Monday to mark the Muslim festival of Eid al-Adha that was circulated on pro-Shabaab websites.

"Don't get fooled by the empty promises... including the provision of money, and the promise that the voting will be secret.

"Learn from those before you," he said, in an apparent reference to traditional elders who took part in the last elections in 2016, some of whom were targeted and assassinated by Al-Shabaab fighters in the ensuing years.

Ubaidah's whereabouts are not known, and it was not clear when the message was recorded. AFP could not independently confirm the identity of the voice.

The Al-Qaeda-linked group has been fighting to overthrow the federal government since 2007 and frequently attacks government, security and civilian targets.

Somalia's political leaders finally agreed last month on a voting timetable after months of stalemate that turned violent at times.

President Mohamed Abdullahi Mohamed and the leaders of Somalia's five states had been unable to agree on the terms of a vote before his term lapsed in February, triggering an unprecedented constitutional crisis.

The political impasse exploded into violence in April when negotiations collapsed and the lower house extended the president's mandate by two years, sparking gun battles on the streets of Mogadishu.

Under pressure the president, commonly known as Farmajo, reversed the extension and ordered his prime minister to reconvene with the state leaders to chart a fresh roadmap towards elections.

Successive leaders have promised a direct vote but political infighting, logistical problems and the Al-Shabaab insurgency has prevented such an exercise.

The upper house vote will be followed by elections for the lower house from September 12-October 2, according to an updated timetable issued last week.

According to a statement issued in June, both assemblies were due to convene to vote for the president on October 10, but no date for this election was given in the updated timeline.

Somalia has not held a direct one-person, one-vote election since 1969, the year dictator Siad Barre led a coup and went on to rule for two decades.

Barre's military regime collapsed in 1991 and Somalia sank into anarchy.