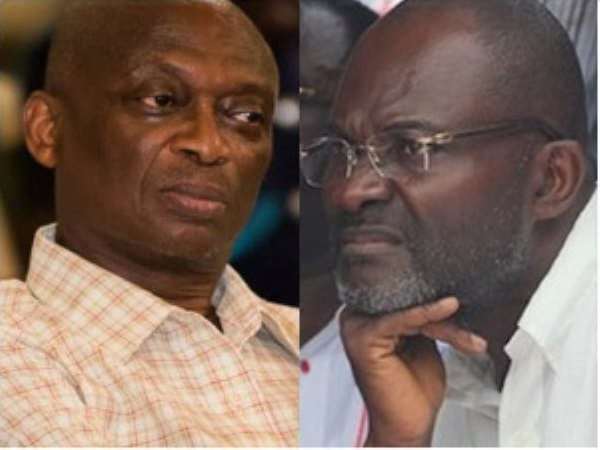 "It is very sad how some people make ugly allegations against others in the public space but fail abysmally to substantiate the allegations when they are provided with an opportunity in a court of law (competent jurisdiction).

Kennedy Agyapong and his "star witness", Nana Kwaku Badu, the NPP Constituency Chairman for Amenfi East were "unmitigated disasters" during cross-examination in the High Court. Kennedy Agyapong, as Defendant, failed to subpoena Frimpong-Boateng as he had indicated to the Court he would; claiming I (Plaintiff) had threatened the Minister, hence the latter's refusal and/or failure to show up in Court to testify on his (Kennedy Agyapong's) behalf! What crude nonsense!

After suffering a humiliating defeat at the High Court, and pending the outcome of his weak and incompetent appeal at the Court of Appeal, this man appears to have grown "some balls" and has re-started spewing the usual ugly noises of allegations of me being involved in corruption and clandestine activities to undermine the Akufo-Addo Administration; similar allegations he proved chronically incompetent and unable to substantiate in the Court of Competent Jurisdiction.

I shall be serializing the transcripts of the cross-examination and excerpts of the judgment of the High Court to illustrate the depths of incompetence and poverty of intellect and logic of this noise maker for all to appreciate the kind of person we are dealing with.

I am told he claims he has some "video evidence" of my involvement in some corrupt, illegal and criminal activities. He had none to support his bogus, malicious and mischievous allegations at the High Court. If he is truly a man of COURAGE OF CONVICTION, I challenge him to make his so-called evidence public for all to see and hear!

However, he should note that I will certainly not hestitate to cure his apparently incurable mischief and mendacity at the appropriate forum as I did the last time! And I can assure him that he would lose again! He would lose because he doesn't tell the truth! And I have no cobwebs of corruption in my wardrobe for him to uneart! If he has evidence, he's challenged to publicize it and abate his crude and cheap public stunts! I am immune to those useless, ugly and noisy antics of his!

Somebody should remind Kennedy Agyapong that he has a MISSED CALL!

Hottest Photo Reports
Catch up with all the political quotes from our politicians.
Advertise here
More Article
ModernGhana Links
The worship of God is the beginning of ignorance?
Energy transitions: The role of institutions and market structures
Accountants can reduce the environmental impact of mining: pointers for South Africa
How multicultural churches in South Africa are breaking down race barriers
Nigerians refer to violence as 'intergroup conflict': what's actually at play is xenophobia
The making -- and then breaking -- of South Africa's Robben Island Museum
Isaac Adongo writes: Under Akufo-Addo the average man's hand goes towards the mouth to drive away flies, not to put food into the mouth
My early memories of the Kumasi Academy Class of 1976
George Andah's call for unity and acceptance: A sign of good leadership
TOP STORIES