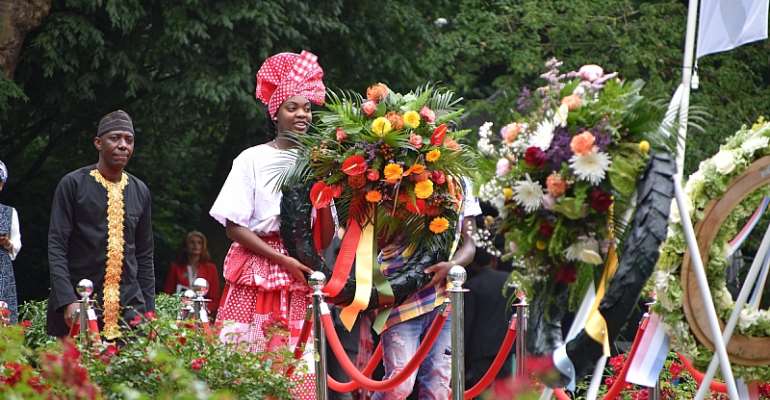 On 1st July 2021, Mr M. H. Idris Deputy Head of Mission, Embassy of Ghana in the Netherlands laid a wreath on behalf the Government and People of the Republic of Ghana to commemorate the Emancipation Day Keti Koti.

Keti Koti commemoration is a reminder that the wages of the hard-working slaves were paid with inhumane treatment. The celebration is equally a recognition that slavery laid the foundation for transforming world economies.

Keti Koti, a phrase from Surinam which means “Broken Chains,” is a festival celebrated annually to mark the date when slavery was abolished in Suriname in 1863. In spite of the abolition, enslaved people in Suriname were not fully free until 1873, after a mandatory 10-year transition period during which time they were required to work on the plantations for minimal pay. Following a state sanction, the Surinamese people were finally emancipated from slavery in the Netherlands Antilles (formerly Dutch West Indies) and in Suriname.

Today the people from these communities provide a key aspect of the colour and personality of Amsterdam and are an integral ingredient in the city’s melting pot. As for the festival, is a celebration of liberty, equality and solidarity. The event entails the Bigi Spikri parade and a remembrance ceremony together with music, spoken words, film and dance performances. Due to COVID-19 measures, this year’s festival was minimized but the wreaths were laid in commemoration of the Emancipation Day.