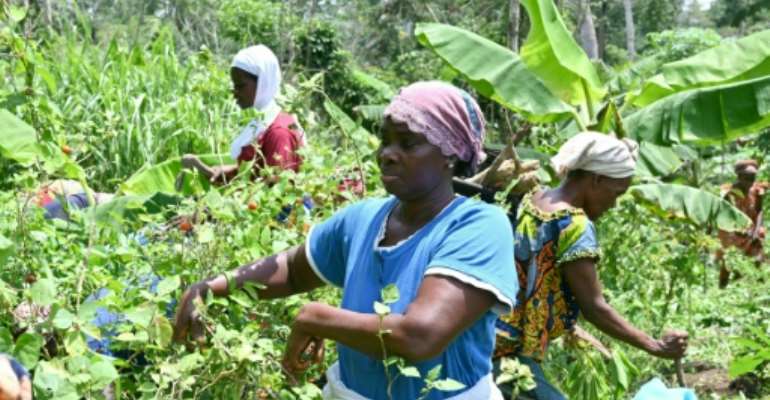 Some 2,000 women have joined forces through the Walo organic farming collective. By Issouf SANOGO (AFP)

Agathe Vanie looks proudly at the products on the shelves of her shop, the first organic stall in the southern central Ivory Coast city of Divo.

"We can make money," she says.

A farmer by profession, Vanie is the president of Walo, a non-profit organisation she founded to bring local women together to grow and sell organic crops.

The eggplants, peanuts, peppers, turmeric and okra come from fields farmed by some 2,000 women around Divo who have joined forces through Walo, which means "love" in the local Dida language.

And, even if the veggies are priced higher than conventionally grown plants, their organic status attracts many customers -- an important sign of growing sensitivity about food quality in this West African nation.

"The chemicals that we use to spray the soil, the plants, the fruits, give us diseases," farmer Marie Michele Gbadjeli told AFP. "Since I discovered this shop, I've been eating healthy food."

The collective says that customers are willing to pay more for organic products. By Issouf SANOGO (AFP)

Ivory Coast's major agricultural export is cocoa, with the country accounting for more than 40 percent of the world's market.

But a historic dependency on the crop exacerbates rural poverty whenever prices slump.

Vanie's hope is that diversifying to cleaner crops will prove a more sustainable choice for their wallets and the environment.

"I brought the women together so that they could start farming organically, firstly for their health, and also so that they can be independent, send their children to school and get out of poverty," Vanie said.

"We will be able to earn money by going into a crop other than cocoa, by growing food crops without chemical fertilisers," she added.

In the verdant village of Boko, farmer Florence Goubo said she was committed to the project and had no regrets.

"We no longer pump chemicals into the fields. The switch to organic has changed our lives," says the mother of five, a hoe in her hand.

"We can earn a little money to take care of our children and educate them."

Peanuts, eggplant, peppers, turmeric, okra and hot pepper are some of the products grown by the Walo collective. By Issouf SANOGO (AFP)

Suzanne N'Dri told AFP: "We were tricked with chemical products."

N'Dri grows bananas, yams and cassava, and plans to add organic food for pigs and goats to his output.

Growing organic means a return to many time-honoured agricultural practices: clearing land, letting leaves and grass rot and serve as natural fertiliser, and planting from the first rains.

But organic vegetables are more labour-intensive and time-consuming than products grown with chemicals which artificially boost soil fertility or kill pests.

The quality and the cost are reflected in the price differential. Walo's organic products can sell in some cases for twice as much as conventional ones: a package of pepper that would normally be priced at 1000 CFA Francs (1.5 euros, $1.80) sells for 2000 CFA Francs.

But Madeleine Zebo, president of an association of women organic farmers in Boko, said customers were not deterred.

Boko village chief Gbaza Zourhouri shared her enthusiasm and noted that children were not being hauled out of school to work in the fields.

"The women have my support and my blessing. Before, all agricultural production was based on chemical products and phytosanitary concerns," he said. "We were being poisoned."

According to the World Bank, 28 percent of the population of Ivory Coast live below the poverty line on less than 1000 FCFA a day.

The rate is even higher among the country's rural population with some 60 percent of farmers living below the poverty line.

Organic food has a long way to go in Africa before it gains the same recognition and popularity as in Europe and North America.

But initiatives like Walo that promote product traceability and quality are gaining ground. The trail was blazed in the cocoa sector, where foreign brands are capitalising on a demand for ethical produce.

Walo wants to use its early success to build a food processing plant -- an initiative that would provide added value to local agriculture and create jobs -- as well as a health centre.