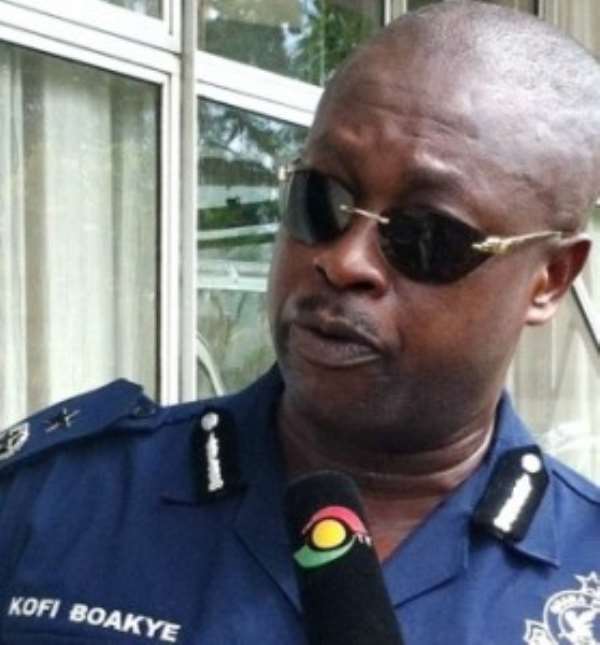 Many Ghanaians, including some security experts, are either of the opinion that COP Nathan Kofi Boakye is due as the best candidate for the post of the Inspector General of Police (IGP), or are canvassing for him to ascend to that post. They claim he is the only top police officer who has the wherewithal to end the spate of armed robberies and other murderous crimes that the country is currently beset with.

What special qualitative ability has he got to quell the near-chronic crimes in the country that those IGPs (David Asante-Apeatu and James Oppong-Bonuah) so far appointed to the position by His Excellency the President, Nana Addo Dankwa Akufo-Addo, lack? Is the police profession not a team work? Could he not impart knowledge and techniques able to successfully fight the crimes to his superiors? Or, he wants to assume that position before implementing them himself to earn public accolade?

Much as I wish him good luck, I personally believe he is not fit for the position based on a number of public domain evidence I have against him. This has nothing at all to do with his once alleged dabbling in cocaine issues somewhere during former President John Agyekum Kufuor’s administration if my memory serves me right.

“He was interdicted in 2006, following the Georgina Wood Committee report which found him culpable in the famous yet scandalous disappearance of large quantities of cocaine aboard the M.V. Benjamin. The committee recommended his prosecution, but the police administration interdicted him, pending further investigations into the case” – Joy Online, 29 May 2009.

I am basing my objection of him being appointed the next IGP on three things.

1. He has corruptly dabbled in the ongoing Kumawu chieftaincy dispute in attempts to stop justice from prevailing in favour of the rightful royals. He conspired with Asantehene Otumfuo Osei Tutu II, to use government machinery and police personnel to constantly intimidate some Kumawu citizens at the behest of Asantehene Otumfuo Osei Tutu II to turn things in his favour and that of the faction he, Asantehene, supports. By abusing his office as then Deputy Commissioner of Police (DCOP) and Police Commander of Ashanti Region, acting not in conformity with the laws but by the influence of one individual, and unlawfully, if not criminally of course, COP Nathan Kofi Boakye will be a total misfit in the post of IGP.

He is biased and has no respect for the laws of the land and the ethics of the police profession. Did he not disregard the hand-delivered letter to him by IGP Mohammed Ahmed Alhassan, directing him to dissociate himself from the Kumawu chieftaincy affairs since it is not the duty of the police to choose who becomes a chief of any particular area? The police are only to ensure that peace prevails during chieftaincy dispute but not to side with any faction through oppressive redeployment of police personnel and government machinery to help impose or force a royal on the inhabitants as their chief contrary to their conventions and other related laws. Kofi Boakye in connivance with Otumfuo Osei Tutu II, of course acting as his poodle, did flout the professional directive to him by the IGP.

2. COP Nathan Kofi Boakye does not see police officers collecting bribes on daily basis from motorists on the nation’s roads as illegal and criminal. He claims the “one, one Cedis” the police shamelessly keep collecting from motorists pale to nothing compared to the corruption being practised by the traditional chiefs, politicians and pastors in the country. The fact that other people are involved in more gargantuan corruption than the “one, one Cedis” being collected by the police 24/7, does not negate the seriousness of the dishonesty of the police as law agents and the criminality of their action.

Is it not little drops of water that make the mighty ocean? Is it not by the small amount of money constantly being collected by the police that lead to some of them engaging themselves in bigger crimes like armed robberies or not checking vehicles and drivers on the roads properly, to result in fatal accidents?

The fact that the police accept the bribes makes them equally as guilty as those giving them the bribes. The police can never exonerate themselves from blame as contrarily being argued by Kofi Boakye. In fact, the police do ask for the bribe payment.

3. Following the uncovering of election 2016 rigging attempts in favour of then sitting President John Dramani Mahama in one of the Kumasi constituencies, where ballot papers had been thumb-printed against the name of John Mahama, COP Kofi Boakye acted questionably. In the much lengthier recorded version of the incident that I saw some time ago but cannot trace it now, COP Kofi Boakye was callously chasing out the spectators gathered at the police station. One could clearly suspect which side his bread was/is buttered.

In the shorter version of the recording of the incident where some unknown persons had secretly thumb-printed ballot papers in favour of John Mahama and NDC and would have sought to have them legally counted for Mahama, a clever Ghanaian could tell volume from it.

To conclude, in my candid opinion, COP Nathan Kofi Boakye is not the right person to be offered the position of the IGP. He is biased and by his views, he is unprofessional, if not a criminal.