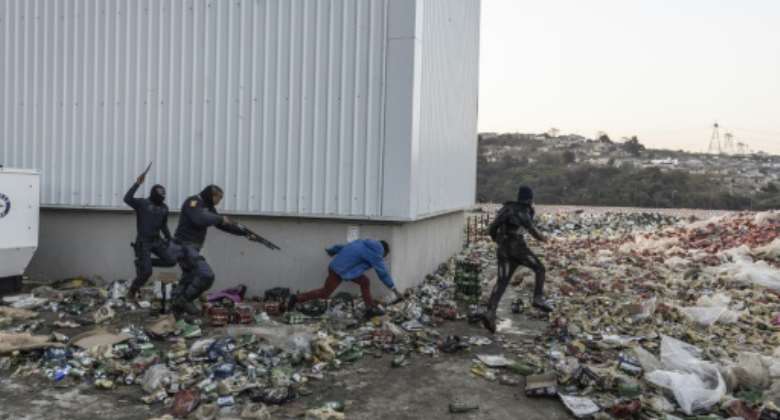 Ex-president Jacob Zuma returned to court on Monday for the resumption of a long-running graft trial, with proceedings held online in a bid to forestall another wave of the deadly unrest that swept South Africa after he was jailed in a separate case.

Security forces threw a cordon around the High Court in the southeastern city of Pietermaritzburg, the capital of Zuma's home region of KwaZulu-Natal, where loyalists have previously gathered in rowdy shows of support.

The measures were later eased to allow street access after the area was deserted.

The trial started in May after numerous postponements and delays, as Zuma's legal team battled to have the charges dropped.

South Africa was then plunged into chaos, with looting and rioting erupting in KwaZulu-Natal, before spreading to the economic hub of Johannesburg in Gauteng province, claiming more than 200 lives.

Looting and rioting has erupted in Zuma's home region KwaZulu-Natal as well as Gauteng province, claiming more than 200 lives. By MARCO LONGARI (AFP)

The unrest was widely seen as at least partially in response to Zuma's imprisonment.

The trial is resuming virtually to avoid more "disruption", the National Prosecuting Authority told AFP, although other court cases are also being heard online due to the pandemic.

But Zuma's legal team claims the online format is unconstitutional and has applied for the trial to be adjourned.

His lawyer Dali Mpofu argued Zuma was being denied the right to a "public trial in front of an ordinary court", to be physically present and consult his defence.

He said the unrest was "unforeseen" and asked Judge Piet Koen to push back proceedings by "two or three weeks."

Zuma's legal team has meanwhile also demanded that chief prosecutor Billy Downer recuse himself from the case over claims he leaked information to the media.

Monday's hearing could reignite tensions that had eased by the weekend, analysts warn.

Local community members clean up debris from the floor in the aftermath of continuous looting and destruction at the Queen Nandi Drive in Durban. By RAJESH JANTILAL (AFP)

Most of the transgressions investigated by the commission involve three brothers from a wealthy Indian business family, the Guptas, who won lucrative government contracts and were allegedly allowed to choose cabinet ministers.

Zuma only testified once in July 2019.

The ANC forced Zuma -- who is a member of the country's numerically dominant Zulu ethnic group -- to resign in 2018 after mounting graft scandals.