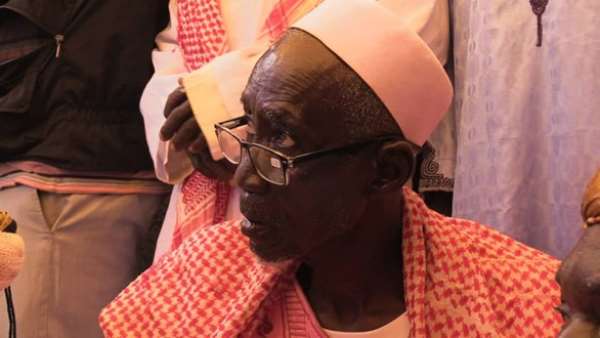 The ancient town of Laribanga in the West Gonja Municipality of the Savannah Region has installed a new Imam for the town.

The coronation took place at the fore front of the Laribanga ancient mosque today, July 17th, 2021.

The new imam, Alhaji Mumuni Zankawah went through vigorous Islamic rituals in the presence of all those who matter in the "imamship" affairs of the town.

He officially becomes the chief imam of the Laribanga township and had his children, family members and other well wishers accompanying him for the historic event.

It was chosen for the task after the death of his predecessor late Alhaji Abutu who died last year.

His assumption of the seat of leadership in Laribanga will make him a new central player and a father as he takes steps to expand the influence of Islam in and around the town.

The ceremony saw the display of Damba dance as men and women thronged the grounds in a glamorous style to add more spice to the occasion.

The event was also characterised with blessings and praises and a moment of rainfall which was later climaxed with merry and jollity by family members.

The coronation also attracted huge presence of people, with many traveling from far and near to catch a glimpse of the inauguration of the new chief imam for the ancient town including the Savannah Regional Minister, Hon. Saeed Muazu Jibril, a former member of Parliament for Damongo, Hon. Adam Mutakilu, members of Parliament for Bole-Bamboi, Hon. Issifu Sulemana, regional and constituency executives of the two major political parties amongst others.