Akufo-Addo’s New Appointment At EOCO Tells A Painful, Chilling, Debilitatingly, Failed Youth Policy Story That We Must All Be Ashamed Of 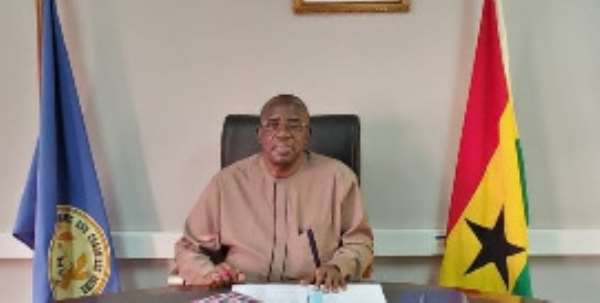 Folks! Yesterday, it came to my attention from reading Ghanaweb news pages that the President of the Republic of Ghana, who is already facing a crisis in his youth policy with over half a million youth and graduate unemployment, has appointed a 77-year-old lawyer, Mr Stephen Raymond Dapaa-Addo as the new Executive Director of the Economic and Organised Crime Office (EOCO) with effect from 9th July 2021.

Let me say before going any further that I have no personal knowledge or dealings with Mr Dapaa-Addo to convince myself that he is either qualified or unqualified for the position. The news item states that until his appointment, he was working as a consultant to the National Security apparatus in the country. The popular grave vine in Ghana suggests that he is the personal friend and classmate of our president, Nana Akuffo-Addo. And I truly hope that his surname of “ Dapaa-Addo” does not add a further sinister equational twist to the puzzle. Working in national security is open-ended in that sometimes, you may even need a very savvy 100 year old to play a prank, trap a criminal or outwit a gang when it comes to role play, scheming or setting traps for your enemy to arrest or thwart their efforts. But surely being a fully functional Executive Director in a hot seated active public sector organisation like EOCO is extremely different by all accounts.

Also, it would be recalled that not quite long ago, the president decided that a younger Ghanaian ( who was suspected of being a Togolese, by merely going on a long enforced accumulated annual leave) Mr. Daniel Dormelovo was too old to continue in public service because there was a doubt as to whether he was already 60 years old or 59 years old. And therefore not young and capable enough to continue as the Auditor General of Ghana ( when the president has so easily extended contracts for the former Chief of Defence Staff, CDS, Lt Gen OB Akwa up to 66 years old, the Inspector General of Police, IGP, James Oppong-Boanuh beyond the age of 63 and other known public servants of interesting persuasions to continue in office) let me also note that it was Mr Daniel Domelovo himself, who by his actions and documentation told us that he was 60 years old and then 59 years old. Why we chose to believe him that he was 60 years old and not 59 years old without any in-depth investigation from the same mouth beats me. May be one age fits better into our own designs and agenda in the protection of those who may not have helped us in “the protection of the public purse”. That story is for another day.

Currently, in Ghana, we have massive crisis of youth unemployment. We have those who have completed JHS and for some reason beyond them, unable to continue with their education, those who have completed SHS in similar circumstances as well as many graduates from our universities and other tertiary institutions either roaming the streets selling dog chains or shoe polish or disappointingly sitting at home with nothing to do except try their hands at Sakawa with the little data they can find on their computer in the hope of finding some innocent vulnerable old woman to dupe or just hanging around local drinking joints in the hope that a politician may notice them and recruit into a party para-military gang or fall into the already open arms of armed robbery gangs looking for youth to recruit. So if our president in his wisdom in making an appointment of this nature does not believe in using it to demonstrate a gesture (even an empty one) that though one appointment may not make a dent in the unemployment figures but may demonstrate that he has a hope and confidence in the future of the youth rather than saturate the already saturated top of society and public service with those who should be relaxing at Labadi pleasure beach with their great grandchildren on a Saturday afternoon or if they are still agile, going round our school and institutions as senior respectable honourable citizens, sharing their experience and knowledge from World War 2 and pre-colonial days to ginger and inspire the youth. So for the president to make this appointment of a 77-year-old when he has forced a 59-year-old to retire from public office is most unfortunate and speaks to his inconsistent view and policy on youth unemployment.

By the way, let me draw your attention to the fact that Mr. Dapaa-Addo at his age, is already retired. He may have to take all his retirement benefits, ex-gratia, (if entitled) and is definitely already on pension. Now how do we pay him as the Executive Director of EOCO? Because we already pay him his pension and ESB, is that enough to compensate him as Executive Director? Do we pay him the difference between his pension earned and what he would have earned as Executive Director, or pay him his full salary and emoluments as the current ED of EOCO in addition to what we already give him in pensions etc as a retiree? Would that not amount to double pay? At the advanced, matured and ripe age of 77. Do we pay him new pension, ex-gratis and ESB when he further retires as the Executive Director or EOCO? At this rate, would he ever retire at all and at what cut off age? I believe society has already acknowledged and honoured him for his contribution to society by his retirement and pension.

My inclination is that being a member of the board of either EOCO or advisory board or consultant to national security or any other board is more worthy to share his experience than directly involved in the management of the day to day running of a state institution. ( I believe firmly that certain independent and quasi investigative and prosecutorial state agencies like EOCO, Special Prosecutor’s office etc, must not even be saddled with boards to compromise their independence and integrity. That’s another debate.) I am hoping that his name, his friendship or personal relation with the president and or his family is not the basis of this appointment. The youth are watching with their eyes glued to the screen of national life and wondering if the presidency and for that matter society really think about their future and is desirous of bringing policies in place that addresses their unemployment future if at the least opportunities we are bringing people out of retirement to take their jobs.

If you are an unemployed graduate or one of the teaming youth who is unemployed or a parent or relative of one, does this presidential appointment give you cause for hope or cause for concern?