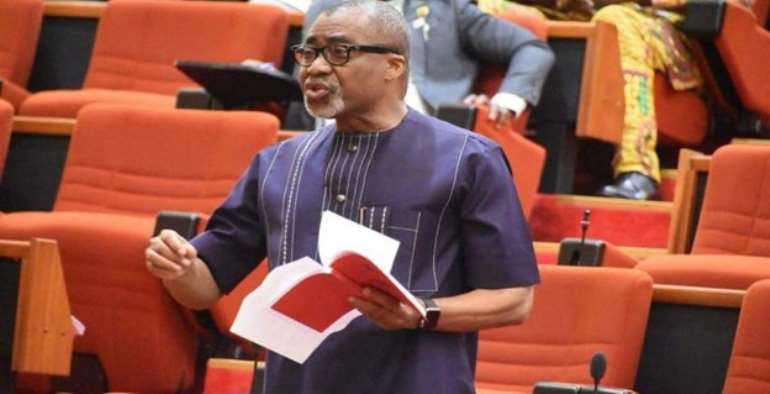 After I read what would ordinarily be regarded as an arrogant, insulting and derogatory script about Southern Nigerians, chronicled by Nigeria’s one-time National Security Adviser, Alhaji Aliyu Gwarzo, and shared out on the social media, I felt constrained to write this letter to all of you political, religious, traditional and academic leaders in Southern Nigeria.

Unlike many Southern Nigerians, I read Alhaji Gwarzo’s article with great interest and satisfaction – because in that script, I deciphered what Shakespeare meant when in his book “As You Like It”, he postulated that the uses of adversity are sweet.

I think many Southern Nigerians missed the point.

Gwarzo retired from the Police Force as an Assistant Inspector-General. Having served three governments as National Security Adviser, Gwarzo is a man who was used to walking tall on the corridors of power in Nigeria.

And so, the first thing we conjecture, when we read this particular write-up of his, is that one of the consequences of being restricted to his home all this while is that the man now desperately wants to make himself relevant again. The pitiable condition of incarceration in which he found himself made it somewhat mandatory that he did something to make himself relevant in the scheme of things once again. Simply put, the man desperately wanted national attention. And the best way he thought he could do that was to alert Southern Nigerians to their impending calamity, without anyone suspecting what he actually set out to achieve if the southerners could read between the lines. Remember, he was once the National Security Adviser.

Anyone who can read between the lines could have easily elucidated that the man had some good message for the southerners, even though the message was related in couched verbosity, possibly for fear of reprisals. And for that reason, I think Alhaji Gwarzo is a great friend of Southern Nigerians and not the arrogant, snobbish Northern leader many believed he was, after his latest wake-up call on Southern Nigerians.

His personal security in the country must be guaranteed by you Southern Nigerian leaders and your friends and associates to whom he has revealed so much. About Southern Nigerians Gwarzo said: “We Fulani toss a small bone to you from our table and you betray and fight each other like dogs for it. You see, the most effective chains are the invisible ones. We already have you in those chains but you just don’t know it.” If you ask me, I would say the man is absolutely correct.

First is that it is the bone they throw to the southerners, not the fleshy meat. So everyone now knows that the fleshy meat is reserved for the northerners. To break that contention down, it is an open secret that Southern Nigerians are very highly educated people. They are the ones who earn the intellectual top marks that make Nigeria proud especially in medicine, engineering, robotics and commerce around the world today. On the contrary, in Nigeria today, about 80% of northerners are stark illiterates who haven’t read up to primary school level.

In entry requirements into institutes of higher learning, the cut-off mark for students from a state like Imo is 66 while that of a northern state like Adamawa is 18. And yet these northerners with very low cut-off marks are the ones who are appointed into the plumb jobs in government, like judges, comptrollers, ministers, heads of parastatals, presidential advisers and so on, to manage the affairs of the country, while those who scaled the exams despite their high cut-off marks are told they don’t qualify. So, as Gwarzo rightly observed, as far as Nigeria is concerned, where has the education of southerners led them to?

But come to think of it and if for once our people can be honest to themselves, there are many ways the southerners behave that seem to buttress some of the points Alhaji Gwarzo mentioned.

Everyone knows, for instance, that if all Igbo and all Yoruba who basically make up Southern Nigeria could team up politically, they would easily dislodge the governance of Nigeria permanently from the arrogant, misguided northerners who make no secret of their claim to be more closely related to their Fulani kiths scattered around West Africa than to their fellow Nigerians.

This is the first reason why Southern Nigerian leaders must take these developments seriously, unless of course they want their people to be enslaved in their own country as Alhaji Gwarzo suggests. They must make no mistakes about the possibility that it could happen if these Nigerian Fulani people open the country’s borders freely to let in their “brothers” from Mali, Niger, Guinea, Côte d'Ivoire, Senegal, Somalia or Sudan to come live with them in Nigeria as Alhaji Gwarzo alerted them in his script. Southerners would be left in no doubt that they would become slaves in their own country. And that includes you, Southern leaders. Those Fulani people are dead serious. They are not joking. They have an agenda. But that agenda can only work if the Southerners are seen by them as indolent and unable to defend their land and their heritage.

I recently watched a video clip where officials of the Northern Peoples’ Amalgamated Traders Unions who claimed to represent all of northern Nigeria kept emphasizing that politics was a game of numbers. They said the north had a population of 120 million. The Fulani are 40 million, making 160 million eligible northern voters. The remaining 70 million, according to them, was the population of the rest of the country. And they pleaded with all northerners to troop out en masse to collect their PVCs and vote another northerner in as President, come 2023.

They argued that since the return of democracy in 1999 as the 4th Republic, the southerners have led Nigeria for 12 years, presumably Obasanjo’s 8 years and Jonathan’s 4 years while the north would have ruled for only 8 years after Buhari steps down in 2023. So, the north would have another 4-year shot at the presidency before any Nigerian can talk of rotational leadership. Since the north had a greater population according to them, a northern president must emerge in 2023.

The fact, our dear Southern leaders, is that Nigeria has been an independent country for over 60 years. In these years, the East led for 8 years, the West for 12 years and the North for more than 40 years. Now that the northerners want to start the counting from 1999, what happens to the years before 1999? Was Nigeria under foreign rule by then? Was there no budget and was it not Nigerian money that was being spent during those years? If we were writing the history or even the political history of self-ruling Nigeria today, would we start from 1999 or from1960?

Every available evidence shows that for the more than 40 years the North led Nigeria, they continued to prove to the world that this idea of managing the country was way beyond their capability. In all those years, all they generally succeeded in doing was to divide the country along ethnic and religious lines, refuse to create jobs for the teeming school leavers in need of jobs, create conditions of massive insecurity in the entire country, create a lopsided economic structure that favoured the north and marginalized the south, neglect education completely in consonance with their policy of discouraging poor families from educating their children and so on.

But sometimes no one needs to blame the North. As Gwarzo rightly pointed out to the Southerners, they must remain the architects of their own fortune and their future.

For example, after the first handshake across the Niger which was held at Enugu, another handshake should have followed in Abeokuta or Ibadan. Then another in Owerri and another in Oyo or Lagos should have followed. The tempo of the meetings should have been kept on the rise and each meeting should have consolidated the burning desire of Southern Nigerian leaders to redeem Nigeria from greedy northern leaders like Alhaji Gwarzo who were bent on milking the country dry and thriving on blood money.

Like the rest of his northern brothers in leadership positions, imagine how much money Alhaji Gwarzo must have stolen from Nigerians. If those billions of dollars were changed to naira, everyone knows what that kind of money could do for the country. Alhaji Gwarzo has already told Southern Nigerian leaders about the Fulani understanding that they will perpetually rule Nigeria as their God-ordained birthright, to use as they like. This then is the time for Southern Nigerian leaders to breast up to the challenge. They should realize that these Fulani people have got a strategic agenda and they are not joking.

Why was there no follow up after the first handshake? Could it have been because of betrayal? Did someone that is highly placed or a group of Southerners accept money from the Northerners in order to rest the idea? That must not be allowed to happen again, if it ever happened for any reason. Serious minded Southern political, religious, traditional and academic leaders must ensure that from now on, series of “handshake” meetings are held, at least every other month in Ibadan, Owerri, Abeokuta, Abakiliki, Asaba, Oshogbo, Calabar, Uyo, Lagos etc.

The inviolable truth remains that only a total coalition of Southern states can save Nigeria from its current circumstances of political correctness and make it the great, just and prosperous country it should be – where all Nigerians, whether they come from the East, or from the West or the North would be happy to be called Nigerians. It is either that or the Fulani agenda.

We all know this but like Gwarzo rightly said, a little money thrown at the feet of some Southerners by the Northerners could easily swerve them to change their minds and sabotage their own people and their country’s wellbeing. That is probably why the man seemed so confident about the vulnerability of the South. Without fear of contradiction, I think this is quite true, coming from a former National Security Adviser.

We shouldn’t see any evil in his alert. This is simply an eye opener to the Southern Nigerian leaders because it is frank talk. It is now left for you, the Southern Leaders, to act and act firmly to forestall the Fulani agenda happening any time in the future.

Once they decide on that, which might necessitate series of handshake meetings, let the war of sense and sensibilities begin. How Rwanda was transformed from being a stooge of Belgium to becoming a great and green nation where, after years of genocide, Hutus and Tutsis now live in harmony like the African brothers they actually are could still happen in Nigeria. I trust that one of you leaders can actually take the lead and call for more handshake meetings. And we will all be here as witnesses to watch the revolution take place.