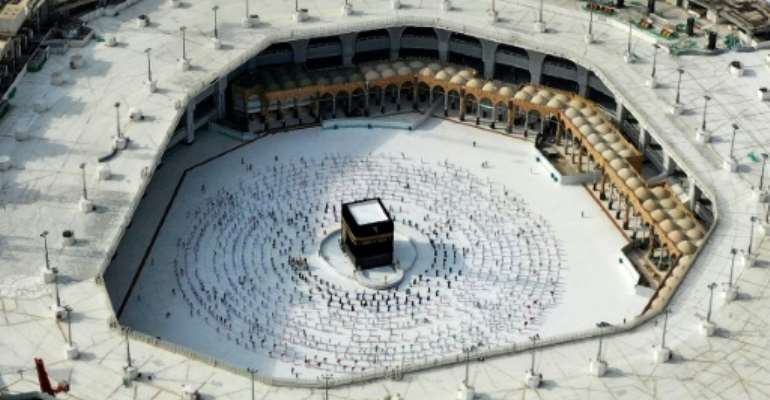 Every able-bodied Muslim is obliged to perform the hajj pilgramage to the Kaaba at least once. By STR (AFP/File)

Samia Ahmed saved up for 16 years, but like many older Muslims she fears that renewed Covid-19 curbs will prevent her from ever making the hajj pilgrimage.

Saudi Arabia has for a second consecutive year confined the annual hajj to a limited number of residents, excluding the millions of foreigners who usually flock to Mecca for the rite that every able-bodied Muslim is obliged to perform at least once.

With her advancing age and declining health foremost in her mind, Ahmed, a 68-year-old Egyptian, cried for days when restrictions were announced last year, months after the coronavirus pandemic hit.

"I had paid the travel agency and had really started to prepare everything," the retired civil servant said.

The hajj is widely seen as the high point in Muslim religious life, bringing the faithful together with millions of fellow believers to fulfil a spiritual obligation at Islam's holiest sites.

Pilgrims will each walk round the Kaaba -- Islam's focal point -- seven times, spend a night on a plain between Mina and Arafat, and symbolically stone the devil by casting stones at three pillars, among other rites.

"I would so much like to make the hajj before I die. I don't know if I'll be alive next year," she sobbed, clutching blue Muslim prayer beads.

Muhammad Saleem Butt from the Pakistani city of Rawalpindi postponed treatment for a liver ailment, only for the pandemic to upend his plans. By Farooq NAEEM (AFP)

While the well-heeled can do the hajj in style, lodging at luxury hotels in Mecca, in poor countries the faithful wait for years and make heavy sacrifices to become one of some 2.5 million pilgrims who take part in a normal year.

But in 2020, just months after the pandemic made large-scale events impossible, only 10,000 residents of Saudi Arabia were able to make the journey to Islam's holiest city, in the west of the kingdom.

This year the Gulf kingdom has expanded the pilgrimage to 60,000 residents who must be aged 18 to 65 years, vaccinated against the coronavirus and not suffering from any chronic disease.

"My chances are now slim, because they will choose younger and healthier pilgrims in the future," said the grandmother, who suffers from diabetes and high blood pressure.

Amina Gaafar, a 58-year-old retired Egyptian social worker, has been saving for 30 years to "go to meet God", but with knee replacement surgery looming, her travelling days may be over.

"I'm finally ready financially, and now it's the coronavirus that's stopping me," she said, concerned that her hard-earned funds will be squandered on everyday expenses.

"I'm afraid that one day I won't be able to perform the hajj at all, because of my poor health," she said through tears, wrapped in a long abaya dress, with her crutch leaning up against the wall.

Only 10,000 residents of Saudi Arabia were allowed at the 2020 hajj; and the ban on foreign visitors has continued this year. By STR (AFP/File)

Cairo travel agency owner Mohammed Essam says that two-thirds of those he books on hajj are over 60.

This year many have expressed their "sadness, frustration and anger", he said.

"In general, most pilgrims from around the world are elderly. People start thinking about the hajj when they have money saved up," he told AFP in his office, adorned with pictures of the Grand Mosque in Mecca.

Worshippers from populous Asian countries like Indonesia, Malaysia and Pakistan make up a large portion of hajj participants, and many wait for years to get to the front of the queue for their chance to make the journey.

Desperate to travel to Mecca, Muhammad Saleem Butt from the Pakistani city of Rawalpindi postponed treatment for a liver ailment, only for the pandemic to upend his plans.

Egyptian Mohammed Alatar tries on the simple garment worn by pilgrims performing the hajj at a store in Saudi Arabia. By FAYEZ NURELDINE (AFP)

"Earlier in my life, I didn't have the money," the 73-year-old shopkeeper said.

"But for the past few years, I have had the resources and my children are married."

"Now, my health is deteriorating, the doctor has recommended an operation," he said, while still holding out hope of going next year.

Jumina, a 65-year-old Indonesian woman, has been saving for the hajj for a decade by running a small shop out of her home, and her family were preparing to celebrate her departure.

"I am very disappointed because I had prepared everything for the trip," she told AFP, including taking two doses of vaccine.

"If I am still healthy enough to go next time, I will go. We are relying on God."