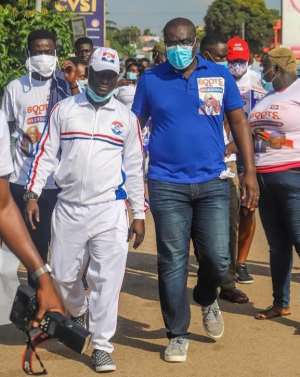 The Youth Wing of the New Patriotic Party (NPP) in the Ayawaso West Wuogon Constituency in the Greater Accra region say they are ready to support any person His Excellency President Nana Akufo-Addo appoints to lead their municipality.

They said they believe the committee which was mandated to vet the candidates did what was expected of them, hence anyone who is appointed by the President qualifies and therefore will get the Youth Wing support.

These statements of assurance to the prospective Municipal Chief Executive for the area come to shoot down some unfortunate comments by some people who sort to represent the Youth Wing, led by one former Assembly Member by name Samuel Duah.

In a video gone viral from their press conference held on Tuesday 13th July, 2021, one could hear Mr. Samuel Duah describing one of the prospective Municipal Chief Executives as “unfit” for the position.

In a statement issued on Wednesday July 14, 2021 by the Aide to the Youth Organizer for Ayawaso West Wuogon Stephen Kabutey, it noted that the Youth Organizer Commander James Ampiaw was not consulted before the said press conference and therefore had no idea about it.

However, he believes that, in as much as every person has the right to express what he or she feels about a situation, it must be done in decorum and through the rightful channels.

The press release from the camp of the Youth Organizer is therefore calling on all the NPP youth in the area to remain calm and support anyone the President appoints.

“The office advises members to remain calm and resolute as we wait patiently for His Excellency the President’s nominations”, the statement noted.

More from NPP News
ModernGhana Links
NPP must be banished forever for messing up the country — Opare Addo
Current economic crisis is payment of what NPP did to Mahama in 2016 — Solomon Nkansah
Akufo-Addo has been booed and so what? Bush, Macron were booed too – Former NPP chairman
TOP STORIES

‘Akonta Mining Ltd has no lease to mine in Tano Nimiri Fores...
29 minutes ago

BoG was ordered to kill Heritage Bank on political grounds t...
32 minutes ago