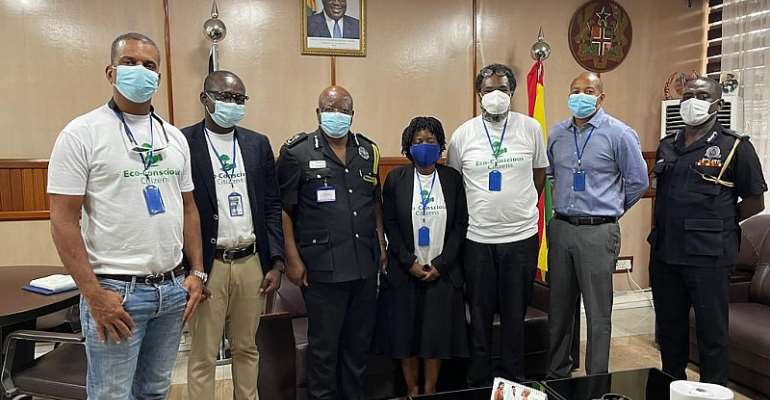 Eco-Conscious Citizens with the Inspector General of Police

A stakeholder meeting focused on dealing with noise pollution will take place in Accra with representatives of municipal authorities, health professionals, faith groups, politicians, the Police and concerned citizens.

The meeting which is convened by the Eco-Conscious Citizens (ECC) environmental group, was suggested by Inspector General of Police (IGP) James Oppong-Boanuh when members of ECC met with him last month.

At the meeting, the IGP was briefed about the experiences of those who took part in the ECC Day Of Action Against Noise Pollution in April.

The head of the Police was informed that police officers at certain police stations would not take noise pollution complaints. Whilst the IGP confirmed that noise pollution was a criminal offence, and that officers should take such complaints seriously, the group felt that this view has to trickle down the ranks.

Also, there were confused responses from the Metropolitan, Municipal and District Assemblies (MMDAs), all of which have environmental departments. Some suggested citizens lodge their complaints with the Environmental Protection Agency (EPA), whilst others used the lack of noise meters as a reason for their inaction.

From our conversations with the EPA, it turns out that its focus is dealing with noise issues arising from the commercial sector, so it advises citizens to direct their noise complaints to the environmental department of the MMDAs. On the matter of noise meters, ECC is calling for a comparative test to be made between the noise meters recommended by the EPA, which costs thousands of US dollars which is clearly outside the budget of many MMDAs, and that of sound meter apps downloadable from the internet or accessibly-priced physical noise meters.

In addition to working towards accessibly-priced noise meters standards, there's the issue of creating a transparent process for evidencing noise pollution within the criminal justice system. Which is why the Attorney General's office is another key stakeholder in this brain-storming discussion.

Among those making presentations, is renowned surgeon Prof. Lade Wosornu, who in 2012 published an article in the Ghanaian Times entitled 'Noise, Toxic Noise And Maddening Noise in Health Issues'. He will also be reciting his poem on noise entitled 'Povertometer'.

The workshop segment will deal with resolving noise pollution from dawn preachers, Muslim call to worship, churches, drinking bars, 'borla' or refuse collectors and the issue of loudspeakers on commercial vehicles.

Whilst current laws may be looked at, it is ECC's belief that it is not a case of new laws, but rather the robust enforcement of current laws and bye-laws, is key to tackling noise pollution. We commend Hon. Henry Quartey, Minister for Greater Accra Region, for ensuring that there is sanity and enforcement. Whilst recognising the challenge in tackling noise pollution, the aim of today's meeting is nevertheless to #MakeAccraWork, by finding ways of effectively dealing with noise offences.