Ethiopia regions send troops to back fight with Tigray rebels 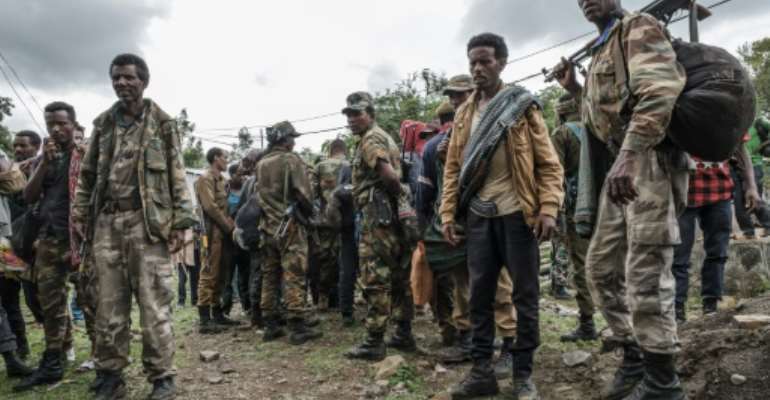 Members of the Amhara militia in Ethiopia have mobilised en masse. By EDUARDO SOTERAS (AFP)

Three Ethiopian regions previously untouched by the war in Tigray confirmed Thursday they were deploying forces to back military operations there, signalling a potential widening of the conflict.

The reinforcements are coming from Oromia -- Ethiopia's largest region -- as well as the Sidama and Southern Nations, Nationalities and Peoples' (SNNP) regions, according to official statements and state media reports.

The mobilisation follows Prime Minister Abiy Ahmed's warning Wednesday that his forces would repel any attacks by its enemies, effectively tearing up a government-declared ceasefire on June 28.

The 2019 Nobel Peace Prize winner declared victory in late November, but fighting persisted and TPLF leaders remained on the run.

Then the war took a stunning turn in late June when rebels retook the Tigray capital Mekele and Abiy declared a unilateral ceasefire, pulling most troops from the region.

This week the rebels -- who have rebranded as the Tigray Defence Forces (TDF) -- launched a new offensive intended to drive ethnic Amhara forces off disputed territory in western and southern Tigray.

In response Amhara security forces and militias have mobilised en masse, and a spokesman for that region, Gizachew Muluneh, said Wednesday it was shifting to "attack" mode to reverse the rebels' battlefield gains.

AFP journalists who on Wednesday visited the town of Adi Arkay, near the Amhara-Tigray border, saw thousands of newly-mobilised Amhara militia fighters awaiting orders to advance.

Officials in northern Amhara said they feared TDF fighters wanted to push south towards Addis Ababa and topple the government.

"We condemn in the strongest terms possible those who are working hard to revitalise this terrorist group. We should stand united to do whatever it takes to incapacitate it," Shimeles said.

TDF spokesman Getachew Reda declared this week that the force would "liberate every square inch of Tigray".

Two days after the TDF took Mekele, he told AFP that its forces were prepared to march on Addis Ababa if that were necessary "to secure Tigray".

It was not clear Thursday how many troops from the various regions were being sent towards Tigray.

A military spokesman reached by phone declined to answer questions about ongoing operations.