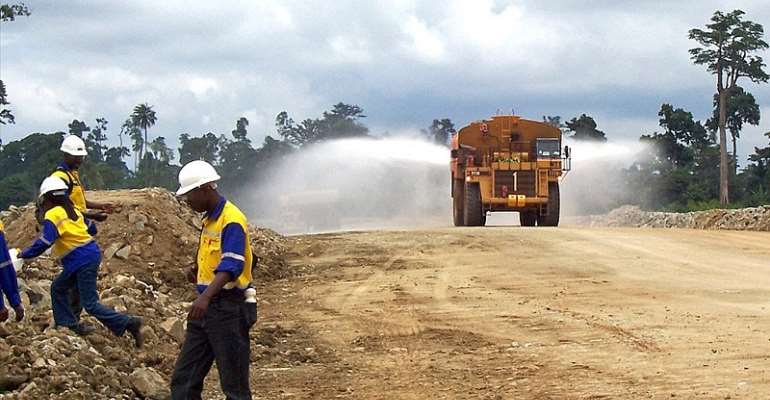 He said such acts, which included the erection of structures with zinc sheets, farming and the construction of fish ponds, if not stopped might deny the "genuine people the right compensation when mining activities start."

Dr Kokofu, who gave the caution after he led a team from the EPA to undertake a recognisance air-borne survey and stakeholder engagement in Ahafo North, described the "speculative activities" as disturbing and unfortunate.

As part of the exercise, the chiefs from the project area namely - Susuanso, Yamfo, Afrisipakrom, Terchire and Adrobaa joined the team from the EPA for a first-hand view of the activities on-going at the about 4,035 hectares mining site.

Within the mining context, speculative activities are often referred to as, hasty and spurious developments by community members and investors with the intent to receive compensation from mining companies.

The EPA Boss noted that the activities were impeding the work of the Company and had the potential to undermine the mining investment and the value it would create for stakeholders, including the government of Ghana.

“We do not wish that host communities will lose out when such a big project is about to take off…however, perpetuating illegality out of greed will not be entertained. What we have seen is that these structures purported to be houses are not habitable. The chain of fishpond does not constitute fish farming activities,” he stated.

Madam Adiki Ayitevie, the Vice President, Sustainability and External Relations, Newmont Corporation, said following the declaration of the sites as a mining area in September 2017, Newmont Ghana conducted a Rapid Assets Survey (RAS) to identify all existing structures in the Area.

She mentioned that all immovable properties within the mining area were counted, assigned with unique codes with photographs taken.

Madam Ayitevie said per the Mineral and Mining Law, only properties that existed on the impacted areas before mining area declaration must be compensated for, hence the need for the RAS.

“... But since the Mining Area declaration and the completion of the EPA’s public hearing in December 2019, several landowners, tenant farmers, sharecroppers, investors and non-residents, in anticipation of illegitimate compensation payments, have undertaken massive speculative activities in the project area," she observed.

She expressed the hope that the EPA would engage the residents to back down to enable the Company to access the land and begin mining activities.

Nana Ansah Adu Baah II, the Chief of Yamfo Community, said the community people were not against the impending mining operations.

“It is just a handful of people in the community who are doing that and they undertake these activities at our blind side. It is an act of greed because people cannot live in those structures. I have formed a group to stop the activities of speculative activities,” he said.

“If a Company like Newmont operates in your community, it means development because the youth will get jobs. They will build infrastructure such as roads, schools, hospitals, Police stations, provide potable water and houses so peace must prevail for them to work,” the Chief added.