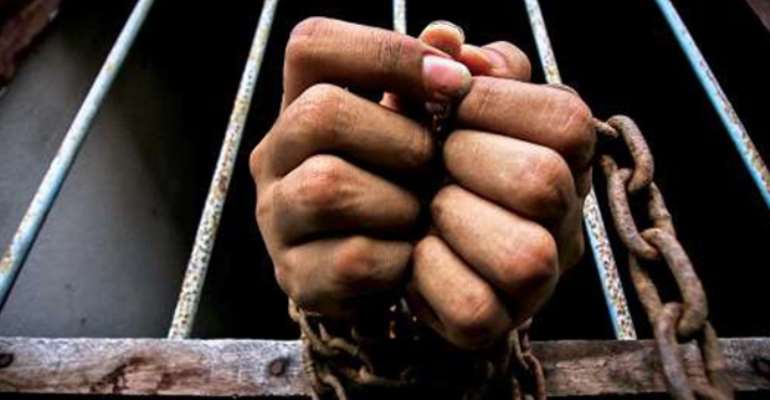 The Enchi District Magistrate court has sentence a 35-year-old farmer to nine months imprisonment in hard labour for causing harm to his ex-wife.

The court again ordered Kesse to pay GHC2,000.00 as compensation to the complainant.

Prosecuting Police Detective Inspector Joseph Kwadwo Agyare told the court presided over by Eric Baah Boateng that the complainant was married to the convict for seven years and have a child with him and reside at New-Yakasi in the Aowin Municipality.

He said three weeks ago, the couple separated and the complainant left the matrimonial home to live with her father but Kesse who wanted her back usually sneaked to the complainant's house, hid behind her windows and peeped through.

The prosecutor said on May 23, around 8:00 pm, the convict repeated the act and the complainant shouted at him and he bolted.

Detective Agyare said on May 24, at about 8:00 am, the complainant met Kesse at the New-Yakasi taxi station and warned him to desist from the shameful act.

The convict became provoked and a misunderstanding ensued between him and the complainant thereafter she left for her farm.

The prosecution said the convict followed the complainant to her farm, held her neck, and subjected her to severe beatings and in the process, two of her teeth got broken.

He narrated to the court that the complainant who started bleeding profusely from the gum, screamed and it alerted her mother and another woman whose farms were close to coming to her rescue, and Kesse on seeing them took to his heels.

Detective Agyare said the witnesses escorted the complainant to the Enchi police station where a complaint was lodged and a medical report form issued to her to seek medical attention at the Enchi Government Hospital.

Prosecution said on May 28, Kesse was arrested and sent to the Enchi police station by the father-in-law.