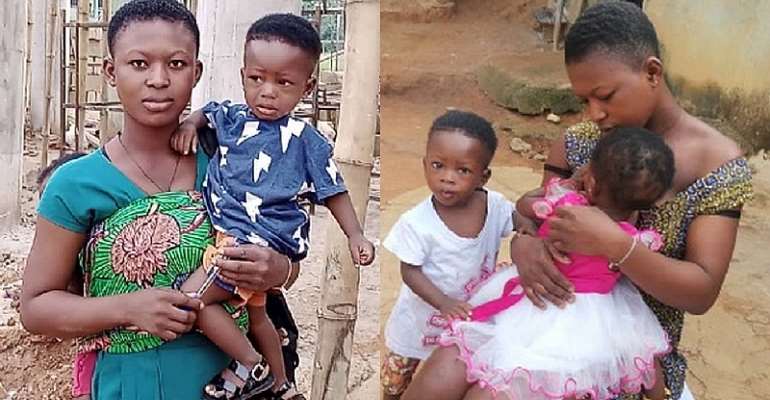 A video of a 17-year-old Senior High School girl babysitting her twin children in uniform at the campus of Offinso Namon Senior High Technical School in the Ashanti Region has gone viral on social media.

In the video, the second year SHS student was spotted carrying one of her twins at her back, one in front while holding a school bag heading towards the school.

The mother of two, identified as Beatrice Agyei was later seen babysitting her twins in the school during contact hours while her colleagues were in class learning

Upon follow up by our reporter, it revealed that the 17-year-old girl is an orphan, a single mother who has been going to school with her two-year-old twins for the past eight months.

Narrating her story, Beatrice Agyei disclosed that she mistakenly got pregnant after the demise of her parents which exposed her to untold hardship.

She further disclosed that she met the father of her twins who promised to help her complete senior high school education.

The man according to Beatrice lured her to bed in the process.

Now with twins, Beatrice is struggling to complete her senior high education.

The only family member ready to take the twins is her 80-year-old grandmother who has also been on the sick bed for the past two years.

It was revealed that the Headmistress of Namon Senior High Technical School Mrs Pearl Owusu has been very supportive to the poor girl ensuring that she gets to the classroom every day to learn.

Beatrice who has vowed to be a nurse has since been going to school with her twins.

"I have always dream to become a nurse and nothing will stop me from achieving my goals, "she stated.