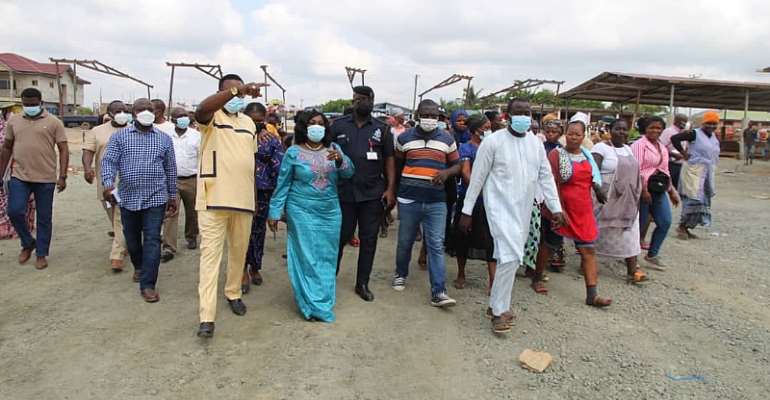 The Ministry of Water and Sanitation is making arrangements to provide facilities that are critical to waste and sanitation to onion sellers at Adjen Kotoku.

Sector Minister Hon. Cecilia Abena Dapaah disclosed during a field visit to the market to assess the sanitation situation in the area.

This comes after the traders were directed to relocate from the Agbogbloshie market to Adjen Kotoku market by the Greater Accra Regional Minister, Hon. Henry Quartey.

The minister during the visit said, "As a Ministry in charge of sanitation, it had become necessary to make provision (through GAMA-SWP) for facilities that are critical to waste and sanitation management in the market."

The Mirror reported that during the day, traders bath and use the movable toilets which had been provided in the market.

Many of the traders did not also have sheds as contractors were seen busily putting up structures to serve all of them.

Some of the traders said they had become squatters in the area who were trying to find their feet at the new site.

But addressing the traders, the minister called for calm as government works to improve the conditions of the market.

The Public Relations Officer for the Onion Sellers Union noted that the current toilet facilities at the centre were inadequate.

He added that there's a need for additional provision of toilet facilities to augment the existing ones.

The PRO also made requests for skip containers and refuse bins to help manage refuse in the area.

According to the minister, the contractor for the project had already been engaged.

The contractor was also present, during the visit, to give assurance of the timely completion of the project.

“Even those who lost elections are thanking people, what are...
31 minutes ago

Komenda Sugar factory 'collapsed' under Mahama; if not, why ...
31 minutes ago