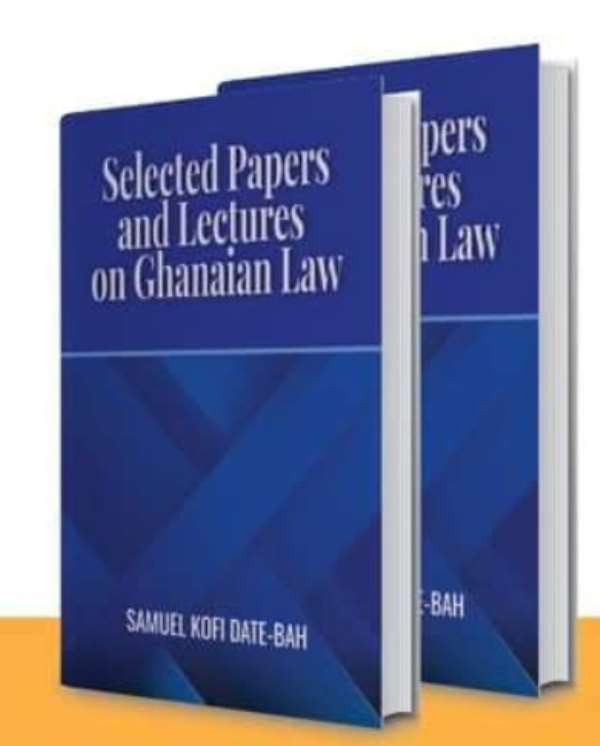 “Selected Papers and Lectures on Ghanaian Law” was authored by a veteran author, accomplished jurist and a Professor of law, Professor Justice Samuel Kofi Date-Bah who retired as a Justice of the Supreme Court of Ghana barely eight years ago. The book is a compendium of selected lectures and papers on law presented by the author on different aspects of Ghanaian law to diverse groups of participants at different fora.

Most of the selected lectures and presentations were made by the author while on the bench, with a few of them after he had honourably retired from the bench. The author receives several invitations to deliver academic lectures and presentations from judges and magistrates, law faculties and state institutions as a result of his vast knowledge and experience in law and he delivers them with distinction. I benefitted from his presentations and lectures when I was the Director of the Judicial Training Institute of Ghana. I became excited when one evening he called to inform me that he has decided to compile some of the lectures and presentations made by him into a book to serve as reference material for people who deal in law. I knew that some of the legal propositions he had expounded at the time of the presentations were no longer the current law, but to my amazement, Justice Date-Bah has revised and updated them to bring them into conformity with the current position of the law.

The original beneficiaries of the presentations were mainly judges and magistrates, both local and international associations, lawyers, law students, staff of some state institutions, participants at the sendoff of an eminent retired Justice of the Supreme Court, and audiences at commemorative lectures for some academic institutions. The author used language of varying levels of technicality, depending on the audience, but in all cases tried to use expressions which would make the presentations user friendly. Any person who reads any portion of this book embodying presentations made to professionals, including judges and magistrates, would attest to the fact that the author has sought to break the myth of legalese in his writing. The book is indeed user friendly.

The twenty-chapter book has been classified into four parts and each part addresses matters under one or two disciplines of law which are interdisciplinary. Chapter 1 of the book outlines the author’s objective for producing the compendium of selected lectures and presentations of interest to judges, magistrates, lawyers, students and literate persons who, though untrained in law, have the desire to acquaint themselves with the law. The author used Chapter 1 of the book to outline the policy rationale for grouping some chapters under one topic to promote coherent reading and appreciation of the topics.

Part 1 of the book deals with important topics in the subject area referred to in the Law Faculties of Ghanaian universities as “Ghana Legal System,” including law as an instrument of development, history and development of legal education in Ghana, and the contributions by Ghana’s Premier Law Faculty (the University of Ghana School of Law) towards national development. The materials encapsulated in Part 1 of the book are a rich source of information for Ghana Legal System and that information cannot be found in any of the few available reference books on this area of law. Legal system and methods is one of the core subjects at the Law Faculties and one of the six examinable subjects for students seeking admission to the Ghana School of Law to pursue the professional law course leading to the award of Barrister at Law. This reference book has come out timeously to fill the lacuna in the literature on the Legal System in Ghana and will help solve the problems of lecturers and students in that discipline.

Parts 2 and 3 of the book are on constitutional law in Ghana. Parts 2 and 3 take account of the Judiciary, and Human Rights and Good Governance in Ghana as rich sources of constitutional law. The Part on the judiciary looks at how the Judiciary of Ghana has discussed and developed important constitutional law matters such as: the independence of the judiciary; rule of law; the role of the Supreme Court in providing remedies for human rights abuses on which the High Court is not seised with jurisdiction; a thorough discussion of the famous case of Re Akoto and its ramifications on the development of human rights by the courts; the importance of the Commercial Division of the High Court and the way forward to make it more beneficial to ordinary members of the public; and how a judge who performs his role with distinction on the bench should be eulogized by colleague judges to serve as a morale booster for serving judges.

Part 3 also discusses important constitutional law matters including: the positive relationship between robust ethical conduct and promotion of integrity in Ghana; the effective use of emergency powers in democratic countries such as Ghana; the relationship between religion and human rights in Ghana; the Council of State and its constitutional role; and the Supreme Court’s decisions on the mandatory role of Parliament under article 181 of the Constitution to approve international business transactions made by the Government. As a lecturer in constitutional law and interpretation of law, I can attest that the book by Professor Date-Bah will help to address the mischief of the paucity of literature on these disciplines in Ghana.

Part 4 provides a narrative on the evolution of business law in Ghana since independence; competition law in West Africa; the relevance of the United Nations Convention on Contracts for the International Sale of Goods (Vienna, 1980) for African State parties; and finally a discussion on salient points of law on arbitration: from arbitration clauses, time to draw arbitration clauses, the New York Convention, forum for arbitration, to the enforcement of both local and foreign arbitration awards under relevant laws.

The author by combining his rich academic background as a full Professor of law, Special Legal Adviser at the Commonwealth Secretariat for twenty years, a Justice of the Supreme Court for ten years, and a Fellow of Ghana Academy of Arts and Sciences has produced this book containing rich lectures and presentations in which he has sought to bridge the gap between academia and legal practice, to make the book useful for its readers.

This is one of the few books which discuss a wide range of different disciplines of law with detailed analysis, making it a one stop shop for judges and magistrates, lawyers, law lecturers and students of law. As an author myself, I recommend this book to all and sundry, especially because it contains a rich source of information on diverse disciplines of the law, and it has been written in a user-friendly style.