On June 21, the Ethiopian people voted in peaceful fortitude to advance their nation towards democracy. Voting in their 6th General Election, the Ethiopian people exhibited with their hands and feet how important it was to choose their leadership, despite the many challenges the nation faces. The Ethiopian people exposed the patently false predictions of violence and chaos, by the Western media and governments. Nothing but political propaganda in an attempt to tarnish the election as illegitimate. However, most revealing of their intent, the same news outlets that falsely portrayed the Ethiopian election prior to its occurrence, have thus far refused to publicize its actual success. Ethiopians with calm determination, voted for unity, peace, and development as they stood in lines for hours in such large numbers that polling stations stayed opened hours longer then scheduled.

Africans Give Elections A ‘Thumbs Up’

The African Union Election Observer Mission-AUEOM, headed up by H.E. Chief Olusegun Obasanjo, former president of Nigeria, had a total of 65 election observers, who covered five regions, visiting many dozens of polling stations.

“The Mission concludes that despite some operational, logistical, security, political and COVID-19 related challenges, overall, the pre-election and Election Day processes were conducted in an orderly , peaceful, and credible manner. There was nothing in the Mission’s estimation, that distracted from the credible conduct of the elections. The Mission, therefore, commends all Ethiopians for the demonstrated commitment to the democratic development of the country.” (emphasis added)

One day earlier, on June 22, the Eastern Africa Standby Force (EASF) Election Observation Mission (EOM), which consisted of a total of 28 observers drawn from eight East African nations released their preliminary report with similar conclusions to that of the AU. The EASFEOM were able to observe the voting process in eight regions of Ethiopia on election day.

There were no election observers from the West except a handful of Americans, who were unable to issue any report due to their small numbers and inability to observe a credible sampling of polling stations. Thus, the only two observer missions, both from African institutions, recognized the Ethiopian General Elections as legitimate. Instead, of the U.S. and other Western nations congratulating Ethiopia, they have been conspicuously silent.

At a packed press conference in the Skylight Hotel, Chief Obasanjo released the findings of the AUEOM to representatives from the media. The journalists present were virtually silent during the question- and-answer period.

This author asked the first question to Chief Obasanjo, which put the scores of press attending on the defensive. I asked, if the success of the Ethiopian election had proven all the predictions by the West and their propaganda outlets of a “violent, chaotic, and illegitimate” election were shown wrong. He answered in a parable. He said: If a person comes to Africa intending to see a ghetto, and that is what is in his mind, even if you show him a palace, he will insist he sees a ghetto. My question, and Chief Obasanjo’s answer, effectively muted the press. The only other two questions came from a South African newspaper and the London Times. Shortly after a second question from this author, the press conference ended. The silence from the reporters attending was deafening, and ironically amusing as well.

Instructions being given to voters on election day (courtesy nebe.org.net)

Chief Obasanjo and AUEOM emphasized the accomplishments of the National Election Board of Ethiopia (NEBE) in conducting an orderly election free of any type of harassment or intimidation. This environment allowed each voter to choose their member of parliament without interference. Ethiopians expressed their pleasure to be able to vote freely in what is now praised as Ethiopia’s most open election.

Quoting from the official statement released by the AUEOM:

“It is noteworthy that the June 2021 general elections took place within the context of reforms that opened the political and civic space which enhanced the enjoyment of more basic rights and freedoms in comparison to the 2015 elections. Among the many positive political developments, the most prominent were the institutional strengthening of the National Election Board of Ethiopia (NEBE), the release of political prisoners and the return of exiled political activists.”

“Based on the overall assessment of the constitutional and legal framework for the June 2021 general elections, the AUEOM notes that it was largely adequate and meets regional and international standards for the conduct of democratic elections.” 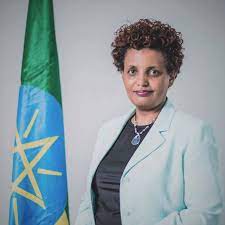 This image has an empty alt attribute; its file name is BM-NEBE.jpg

NEBE is recognized with overcoming many election challenges in this diverse nation of a 110 million people immersed in ethnic conflicts. Yet in this historic election, 47 political parties were on the ballot, including opposition parties, with 9,300 candidates vying for 745-seat federal parliament positions and regional councils. There was a noticeable increase in participation by civil society in the election process prior to and on election day.

Much of the credit is given to Birtukan Mideksa, who was recruited to return to Ethiopia from the U.S. as part of Prime Minister Abiy Ahmed’s reform movement, and she was immediately elected her position as Chairperson of the NEBE in November 2018. Her history as a lawyer, a judge, an opposition party leader, who was twice detained in jail by the Ethiopian government, gave her the qualifications and authority to make NEBE independent, and free from government control.

“The AUEOM notes NEBE enjoys the trust and confidence of stakeholders. This is mainly due to the transparent and consultative process constituting NEBE as well as the positive perception of the Chairperson, Ms. Birtukan Mideksa, a former Judge and political detainee.”

At the press conference, Chief Obasanjo rejected any notion that the June 21 election was illegitimate due to the absence of voting in a minority of the nation’s 550 voting districts. There will be a second election in September for citizens of those regions unable to vote, excluding Tigray.

Lawrence Freeman is a Political-Economic Analyst for Africa, who has been involved in economic development policies for Africa for over 30 years. He is the creator of the blog: lawrencefreemanafricaandtheworld.com. Mr. Freeman’s stated personal mission is; to eliminate poverty and hunger in Africa by applying the scientific economic principles of Alexander Hamilton

Police launch investigations into murder of Tweneboah Kodua ...
1 hour ago