Placenta is used for money ritual; collect it after delivery before leaving the hospital — Quotation Master to parents 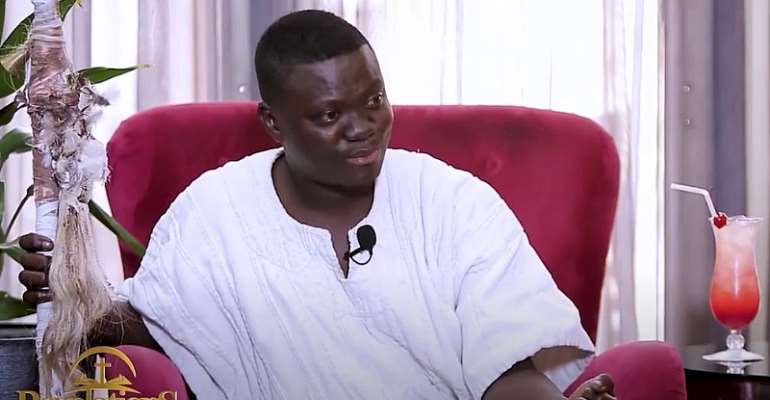 Nana Kwaku Peprah has advised parents to make sure they demand the placenta of their babies after delivery at the hospital.

Popularly known as Quotation Master or Lucifer, he cautioned that leaving the placenta of your child at the hospital as has been the norm is not a good practice to be encouraged.

The placenta is an organ that develops in the uterus of a woman during pregnancy. "It's a structure that provides oxygen and nutrients to the growing baby and removes waste products from the baby's blood."

The placenta attaches to the wall of the uterus, and the baby's umbilical cord arises from it. The organ is usually attached to the top, side, front or back of the uterus. In rare cases, the placenta might attach in the lower area of the uterus.

Normally after delivery at the hospital, the placenta together with other after birth stuff are taken away by hospital officials and disposed off.

In a telephone interview with this reporter on Sunday, 11th July, 2021 on GBC's 'About Life' show, Nana Peprah revealed that the destiny of every child is tied to the placenta.

He spoke on the topic "How Spirits Communicate With Humans".

He stated, "After your wife delivers, demand the placenta, take it home, pray over it and say anything you wish and you want to happen in your child's life over it and bury it.

"If you've your own house bury it there. If you leave in a rented house, go to a nearby forest or any nearby bush where no one would see you, pray over it and bury it".

Explaining the rationale, the African traditional spiritualist, teacher and advocate noted that, "No one can destroy or temper with the destiny of a child whose placenta has been properly disposed of by the parents".

On the same programme, a caller revealed that some tribes in Africa are known to bring the placenta of their babies home, perform some rituals on it and allow the parents to eat it.

To this, Quotation Master underscored the fact that, "Those people understand spirituality and once the placenta is eaten by the parents, it means the destinies of their children are hidden within the parents and no one can destroy such children".

He cautions that the placenta of children are used to perform money rituals and parents must be careful about who disposes off the placenta of their children. "Take your child's placenta home and dispose it off properly to safeguard the destiny of your child".

W/R: Adiembra residents save 17-year-old student from kidnap...
50 minutes ago