By Varney Kamara || The Day Light 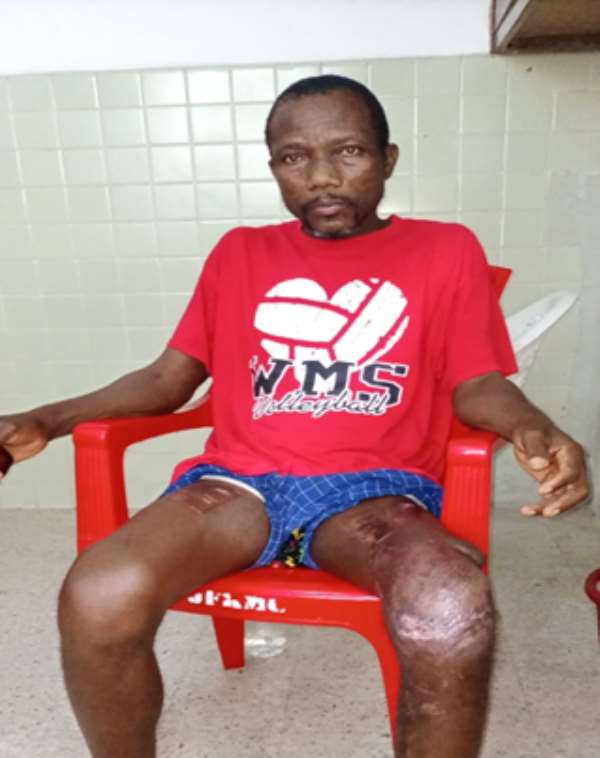 HARBEL, Margibi County – Six months after Firestone sacked Moses Flomo without a severance pay after nearly three decades of service, he suffered a severe injury while performing a menial job at a farm in Totota, Bong County.

Doctors had to cut some flesh from his buttocks to stitch his injured, left knee. Having recovered fully, Flomo, 54, has been stuck at the John F. Kennedy Hospital in Monrovia for more than a month now. Why? He cannot foot his medical bill of L$200,000 (US$1,176).

“If Firestone had not sacked me, or even if they had given me my benefit, I wouldn’t have ended up in hospital,” Flomo tells The DayLight in an interview inside his hospital ward. “All my suffering… has gone in vain. I don’t know how I will leave this hospital.”

Flomo was among 24 workers Firestone sacked in July 2019 after fire they started in their gardens sprayed over to scores of rubber trees on the company’s plantation in Margibi County in May that year.

The dismissed workers, who served the company between nine and 30 years, are challenging their dismissal. They sued the company at the Civil Law Court in Monrovia for wrongful dismissal less than two weeks into their sacking.

Firestone says its investigation found the former workers were not authorized to burn their farm, though the company was aware they had garden and cut a 50-foot fire boundary. “You did not obtain permission from your bosses before burning your garden, which resulted into 12 rubber trees being affected, thereby leaving two of the affected rubber trees dead at the location,” Flomo’s July 8, 2019 dismissal letter, seen by The DayLight, read. Firestone alleges that their action violated the Decent Work ActHYPERLINK "https://bushchicken.com/wp-content/uploads/4d_internet-DECENT-WORK-ACT-2015_MOL-1-1.pdf" of 2015 , which allows companies to dismiss employees who “carelessly or intentionally destroyed” their properties.

The Firestone Workers Union (FAWUL), who leads the lawsuit for Flomo and the other workers, has a different version of the incident. FAWUL says its investigation showed that no rubber tree was destroyed despite being “scorched,” adding Firestone is still tapping the trees in question. The DayLight’s investigation shows that the rubber trees in the middle of the dispute in Division 35 are currently being tapped. This reporter saw tapping marks and rubber cups fastened to the controversial trees, with latex in them.

FAWUL also alleges that Firestone sacked the workers without its knowledge. “All warnings, suspension and dismissals will be read and explained to the offending employee in the presence of the Union representatives,” reads the collective bargaining agreement (CBA) between Firestone and the workers. “The shop steward/union representatives will witness with his/her signature.”

Some of the controversial trees in the center of the wrongful dismissal lawsuit against Firestone being on June 17, 2021 The Daylight/Varney Kamara

The case has been moved to the Sixth Judicial Circuit Court in Kakata. In August last year, the Civil Law Court in Monrovia transferred the case there over jurisdiction. The Monrovia court had ordered the transfer to Margibi since it was where Flomo and the other workers were dismissed. FAWUL had asked the court to make a declaratory judgement, which happens when a party does not dispute an allegation against it. But the Judge Yamie Gbeisay denied that request. Gbeisay also rejected Firestone’s petition to dismiss the case in the September 11, 2019 ruling.

Final augments into the case ended March but ruling has not been handed down. Judge Koboi Nuta, who now presides over it, refused to give The DayLight the case filings, which are public documents. We managed to obtain it elsewhere.

“I will be strongly disappointed if my people lose this case,” says Allen Attoh Wreh, the representative in Margibi District #3. “I am fully on the side of my people because dismissal was the right decision here.”

Evicted in the Rain

Flomo and other workers were evicted from their plantation homes less than a month after their dismissal, despite the Margibi court’s disapproval at the time.

“It was raining heavily when armed men arrived. They threw my proprieties outside of my house,” recalls Moses Tokpah, who worked as a rubber tapper. “I am left with nothing. I cannot afford to feed my family.”

Firestone denies any wrongdoing, adding the dismissals were legal. The company had warned the employees against setting fire in the area as it was close to its plantation, and weather was windy, according Patrick Honnah, Firestone’s communications manager. He did not show any proof of prior warning. “The group of employees disregarded the warnings and set fires…,” says Honnah in an emailed interview.

The disputed dismissals came four months after Firestone announced it would lay off 800 workers or 13 percent of its workforce. The company said the job cuts were overhead-cost-related losses due to a slump in the prices of rubber and low production, linked to the Liberian Civil War. It cut the planned layoffs to 374 workers last year.

Firestone is one of Liberia's leading employers, with more than 6,000 employees, almost entirely Liberians. The House of Representatives was furious that the proposed redundancies would have taken bread from the mouths of thousands of Liberians. The company—owned by Japan’s Bridgestone Corporation and is the world’s single-largest natural rubber producing company—stood firm on its decision.

These episodes have created an atmosphere of fear throughout Firestone’s 45 divisions, according to Rodennick Bongorlee, the president of the Firestone Agriculture Workers Union (FAWUL). A truck driver around the same time Flomo was fired, Firestone dismissed a truck driver over drunkenness, though the volume he consumed did not breach its policy. FAWUL intervened and he was allowed back to work.

“The… workers on the plantation are nervous that they, too, can be fired at any time,” Bongorlee says. “We’ll fight this case. We’ll not rest until our people get justice.”

In 1926, it signed a 99-year deal by the government of Liberia to lease a million acres at a price of six cents per acre, regarded as one of the worst concessions in human history. The parties amended the agreement in 2008, to extend it to 2046.

Not long after that, it was involved in forced recruitment of workers, leading to the resignation of President Charles D.B. King, according to Liberia’s Truth and Reconciliation Commission (TRC) in its report in 2009.

In 1990—the same year Flomo was employed— Firestone gave rebels US$2 million annually for protection to continue its operations while the war was ongoing, the TRC said. Those findings were corroborated in a 2014 report by ProPublica on the company’s wartime dealings.

In the mid-2000s, it was soaked in allegations of workers sleeping in windowless buildings, child labor and other work-related issues. It denied those allegations but began making improvements beginning 2007.

And last month, over 200 retirees won their lawsuit against Firestone and the National Social Security and Welfare Corporation (NASSCORP) over pension benefits.

Still on his hospital ward, Flomo does not intend working with Firestone again. The lawsuit he and his colleagues filed two years ago demands reinstatement.

“I only want my severance pay for all these years I labored,” says the father of seven, sitting in a red plastic chair in short trousers with large scars on his thighs and left knee. His 29 years of service could earn him more than US$3,000. “I purposed in my heart that I will build a three-bedroom house in Kakata upon receiving my pension money.”