Good one there GAF 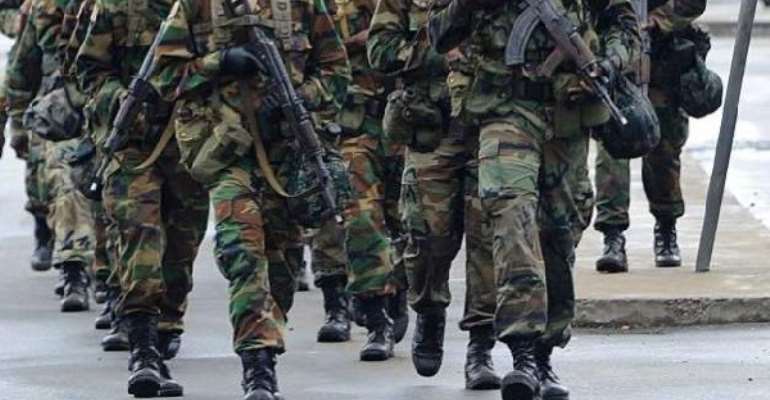 Impunity, uncivilized and unprofessional conduct is inconsistent with the military.

Unfortunately however, the military being a human institution, instances of indiscipline occasionally rear their heads.

It is for this reason that Ghanaians should view the misconduct of young soldiers of the 10 Mechanised Battalion in Wa as an isolated development.

Deserving sanctions in line with military standards have been meted out.

The military establishment is the last place where indiscipline will be brooked. With the military law manual available for reference the misconduct of the soldiers was a simple, cut and dry affair for the Commanding Officer to deal with.

Having assumed the level of public opprobrium in a social media age the involvement of the Chief Of Army Staff was not surprising.

With the level of punishment meted out to the soldiers and the visit of the Army Chief and a high level team from the General Headquarters of the Ghana Armed Forces, the aggrieved people of Wa and indeed Ghanaians in general are relieved.

Ghana is no longer a country managed by a coup-loving junta which would look on as civilians are brutalized.

Perhaps had the young soldiers learnt a bit of the dark chapters of the country's military and how the events of the time marred the image of the Ghana Armed Forces they would have behaved differently even after losing their mobile phones.

We recall how the subject was being manipulated to create a false impression of a failed state.

The standard order of things prevails in the country hence the swift action. The President is constitutionally the Commander-In-Chief of the Armed Forces. On his behalf the Service Chiefs ensure the protection of the territorial integrity of the country.

Officers and men of the military are subject to two set of laws one of which supersedes the other in importance and level of reach. The civil law under which all citizens, personnel of the Armed Forces inclusive are subjected to supersedes military law which is restricted to soldiers.

Knowledge of the foregone by both young soldiers and civilians will go a long way in obviating the kind of incident which took place in Wa.

Never again should we witness the crap which unfolded in the streets of Wa on that day. Civilians who suffer at the hands of unruly soldiers must be able to report the unruly men in uniform to any military police post of the civil police.

Those who have recently joined the military and think the privilege of being enlisted bestows a certain level of exemption from existing laws have got it wrong. They must rethink their positions lest they find themselves in more serious ado than those who are sweating in the guardroom and others who have lost their ranks.