Hundreds left homeless in Douala after demolition of airport neighborhood 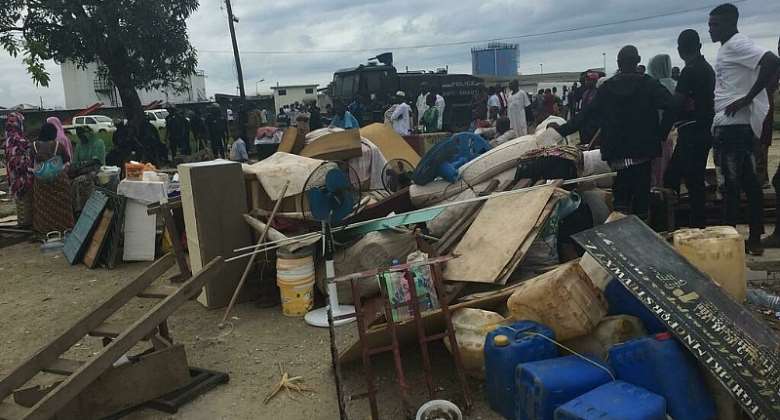 A once-lively and densely populated neighbourhood in Cameroon's economic capital of Douala is a shadow of its former self after a massive government-sanctioned demolition cleared the area of most of its homes, businesses, places of worship and a school.

More than a thousand families and five thousand residents are now homeless and stranded.

“At the age of 79, I have been sent out to the streets," said an elderly resident forced out of his home. "They are breaking my house and I couldn't even remove anything from it because I have no strength,” he told RFI's Africa Calling podcast, sitting miserably on an old piece of wood as houses were being destroyed all around him.

The demolition team initially faced resistance from the neighborhood on the day they began levelling the buildings. Refusing to leave, residents screamed, “We are not going anywhere!”

Some young men burned tyres and other objects in protest, barricading the road leading to the airport and the neighborhood. Their attempt to stop the demolition team from accessing the site was in vain as anti-riot police fired teargas and live bullets to disperse them.

Mirabel, another local resident, watched helplessly as her father's compound was turned into rubble. She and her mother burst into tears as they witnessed the destruction of their homes and everything they possessed.

She called out the Cameroonian government. “They should not only destroy because they want to destroy or to take the land, they should look at the condition of the citizens, it's not easy”.

“They call us citizens of Cameroon; they need to help us now! It's not fair,” she said tearfully, as bulldozers crushed her father's house.

“Those who don't have anywhere to go, where do they expect us to go now?” she added, wondering not only about her own family, but all those left homeless.

The destruction orders came from the regional Wouri Senior Division Office. Its representative said on site that the “cleaned-up” land belongs Douala International Airport and was unlawfully occupied by individuals.

“It is the airport's land. The population settled here illegally and we are evacuating them in accordance with the law,” said Hector Eto'o Famé, first assistant officer.

When asked by Africa Calling if the government planned to relocate or compensate evicted residents, he explained in French that a relocation package was not possible.

“According to the law, persons illegally occupying government land do not deserve any compensation,” he said.

Illegal, but given a government school

Chief Enow Benjamin Taku, a third class chief of the neighborhood, made several attempts to negotiate with local authorities to stop the demolition and eviction order. All of them failed.

In his sitting room at the centre of the neighborhood a couple of days before his and other residents' homes were demolished, he recalled that people began settling there more than 35 years ago. He finds it hard to understand why they are now called squatters when the government even built a school for them.

“It's the government who accepted us, because the government saw when we were building, starting in 1984… and they didn't demolish then,” said Chief Taku.

“The government gave us a school, a very nice school. I believe the government cannot behave that way. My people have been troubling me and I can't give them any good response,” he added.

Others claim that the demolition has been carried out because the area is needed for the Africa Cup of Nations (AFCON), which Cameroon is hosting in January 2022.

While that information has not been officially acknowledged, Chief Taku says his neighborhood, including his home, had long been targeted for preparatory works.

“I got the news that they would come and give us a road here, from the airport to the main road, for the players,” he said, referring to the football teams that will take part in the continental football tournament.

Former professional cycling athlete and resident Fernand Zepad was driven out of his family home. He had put his life savings into it and is deeply shocked.

“I've suffered in cycling which is not even rewarding in Cameroon, I struggled and built a small house which I had not even completed,” Zepad said.

“Now I see it crashed to the floor at my age, I'm already above fifty. How do I begin again? With my little children, where do I go?” he cried out in despair.

While some evicted residents were able to save a few of their belongings, others lost everything.

Some, with nowhere to even squat, are left to roam the streets of Douala. More are destined to be made homeless after the third demolition is expected to completely clear the area later this year.