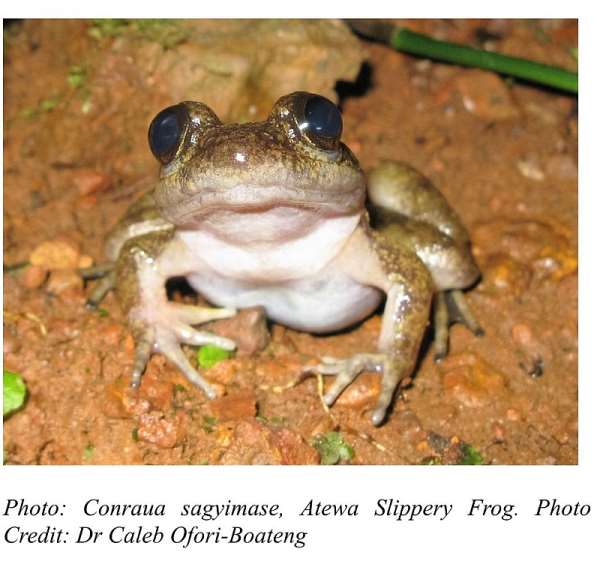 A newly discovered critically endangered frog species found nowhere else in the world beyond the Atewa Range Forest Reserve has been described and published.

With the common name Atewa Slippery frog, the new species has been named Conraua sagyimase after the community of Sagyimase at the foot of the Atewa Forest that has supported work on the frog.

The Akan common name for the new species is “kwaeɛ mu nsutene apɔnkyerɛne”, meaning the frog of the forest streams.

This discovery comes on the back of the recent global designation of Atewa Forest as an Alliance for Zero Extinction site (AZE), a designation that means the area is now a ‘No-Go Area’ for companies and banks adhering to the International Finance Corporation’s Performance Standards for project financing.

The Conraua sagyimase is found only in five streams in the northern part of the Atewa Range Forest Reserve. The scientists, who include Ghanaian Scientist Dr Caleb Ofori-Boateng from the Center for Scientific and Industrial Research (CSIR) -Forestry Research Institute of Ghana (FORIG), highlighted that the new frog species occupies relatively pristine upland evergreen forest habitats within an elevation range of ~ 500–750 meters above sea level.

In a statement signed by Mr Daryl Bosu, Deputy National Coordinator of A Rocha Ghana, an Environmental Non-Governmental Organization and copied to the media said, in the published paper, Dr. Caleb Ofori-Boateng said “the name of the new species has been chosen in order to honor the people of the Sagyimase community.

The statement said Dr Ofori-Boateng revealed that the Sagyimase community supported the research of the scientists as well as the anti-mining campaigns during 2006–2007, and continue to do so even now, “We hope that the naming of this endemic species will further encourage the community in their fight for an intact Atewa Range.”

It said the discovery again highlights the importance of the Atewa Range Forest Reserve as a critical conservation area within the Upper Guinean biodiversity hotspot, lending further support to the national and international advocacy campaign to make Atewa Range Forest a National Park in its entirety.

The statement said new frog species adds to the more than ten other species of wildlife, including butterflies and other insects, frogs, spiders, plants and trees, found nowhere else in the world other than the Atewa Forest.

In November 2020, the International Union on the Conversation of Nature (IUCN) Resolution 087 was passed, asking for global action to make Atewa Forest a National Park to secure this invaluable collection of biodiversity as well as its crucial water provisioning services for over five million Ghanaians.

More than ever before, it is evidentially clear that the Atewa Range Forest Reserve needs to be managed as a National Park to preserve its biocultural assets, as reiterated by the Okyenhene Osagyefo Amoatia Ofori Panin II in a recent meeting with the Chief Executive Officer of the Ghana Tourism Authority.