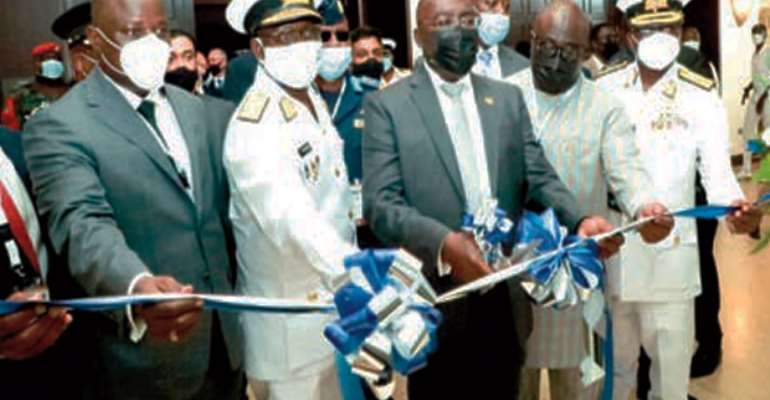 The threat to maritime trade on the Gulf Of Guinea has never been so palpable.

With their enhanced capacity to survey the gulf as they wish and strike with impunity pirates have made international maritime trade in our part of the world more costly.

The daredevil skirmishes of pirates on the Gulf Of Guinea are as though they are daring our navies to sea battles.

The increased insurance cover for maritime trade as a result of the extra risks freight companies endure are some of the reasons why more money is going into moving cargo from Europe and others to West Africa.

The navies of the countries constituting the gulf under review have the onerous responsibility of tackling and eliminating the pirates.

They have been at it over the past years but truth be told the gulf navies are constrained by a lack of impactful cooperation  required in such complex naval ventures.

The International Maritime Defence Exhibition and Conference (IMDEC) which opened a few days ago has been an opportunity to peep into the world of piracy and how it affects international trade.

Vice President Dr. Mahamudu Bawumia's charge on the navies of participating countries to work to eliminate piracy on the Gulf is in recognition of the importance of joint action in such matters.  After all when the Nigerian or Benin segment of the gulf is disturbed by the pirates it certainly will affect the fortunes of countries lining the sea route especially to the west.

The nexus between a secure maritime domain and a developed blue economy, part of the theme of this year's exhibition and conference cannot be marginalized.

The importance of a secure sea route as it passes through the gulf has an unwavering resonance on the fortunes of the gulf countries. Insecurity along this sea route will definitely increase the risk of instability. When governments fail in their responsibility of providing jobs and poverty is enhanced in the face of dwindling economic fortunes instability becomes imminent.

Let not the contents of the communiqué which emanated from the high-notched engagement not remain on paper. It should be implemented without inhibitions. Coupled with the existing annual naval exercises of the gulf countries a strong signal would have been sent to the pirates that their impunity must halt.

The inclusion of air forces of the countries constituting the gulf should be brooded upon as a matter of exigency the role of this arm of the military in sea operations being a sine qua non in modern times.

The cost of policing the sea is expensive because of its peculiar nature. With the bulk of international trade sea-bound bureaucracy should not be allowed to impede the release of budgetary allocations for maritime security.

We would rather a mechanism is put in place to ensure a more frequent meeting of representatives of the gulf navies to review the joint response to piracy and the notorious incidence of kidnapping at sea.