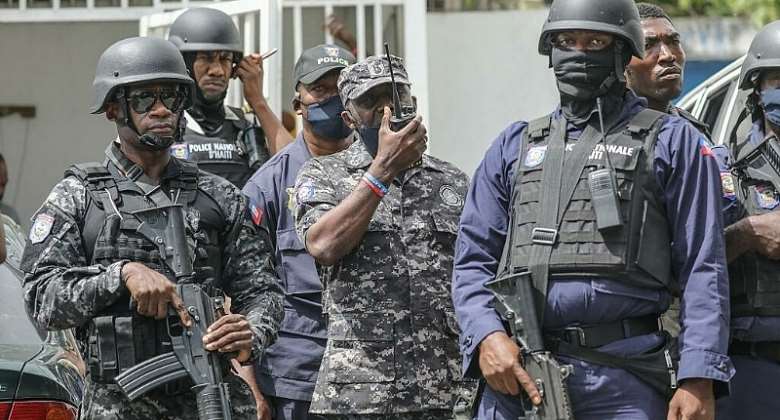 A 28-member hit squad made up of Americans and Colombians assassinated President Jovenel Moise, Haitian police said Thursday, adding that eight were still at large as the country lurched into political chaos.

The Haitian police now seem to know a little more about the commando responsible for the assassination of President Jovenel Moise on Wednesday night. According to them, it was composed of 28 people.

"It was a team of 28 assailants, 26 of whom were Colombian, who carried out the operation to assassinate the president," Leon Charles, head of the Haiti's National Police, said at the press conference in Port-au-Prince.

"We have arrested 15 Colombians and the two Americans of Haitian origin. Three Colombians have been killed while eight others are on the loose."

26 Colombian, 2 US suspects
Taiwan confirmed late Thursday that 11 of the suspects were arrested on its embassy grounds, after security discovered a group of armed men had broken into the courtyard of the property that had been shuttered "for safety reasons" after Moise's murder.

Colombia's defense minister Diego Molano said at least six members of the hit squad appeared to be Colombian ex-soldiers, and that he had ordered the army and police to help with the investigation.

Haiti's ambassador to Washington, Bocchit Edmond, has said the killers were "professional" mercenaries disguised as US Drug Enforcement Administration agents.

Haiti has requested US assistance in its investigation, according to State Department spokesman Ned Price.

"We are aware of a Haitian National Police request for investigative assistance and the United States is responding," Price told reporters.

Political meltdown
Interim Prime Minister Claude Joseph has declared a national "state of siege" and said he was now in charge.

Joseph has only been in his post as prime minister for three months, and was due to step down within days after Moise named a replacement on Monday.

Joseph's replacement, Ariel Henry, said Joseph "is no longer prime minister in my opinion." "Does a country have several prime ministers?" asked Henry.

The unpopular Moise had ruled Haiti by decree after legislative elections due in 2018 were delayed. As well as presidential, legislative and local elections, Haiti was due to hold a constitutional referendum in September.

In Port-au-Prince, shops, banks and gas stations were closed. The border with neighboring Dominican Republic -- the two share the island of Hispaniola - was closed. Haiti's main airport was also closed, but due to reopen on Friday according to Claude Joseph.