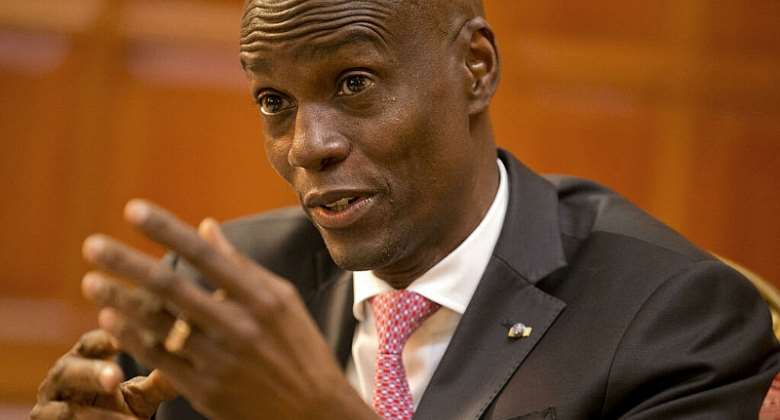 The UN Security Council is holding an emergency meeting to discuss the crisis in Haiti following Wednesday's murder of President Jovenel Moise, and the ensuing uncertainty about who now governs the country.

As Haiti begins two weeks of national mourning, police say they are continuing their hunt for the perpetrators.

Four gunmen were killed by Haitian police and two more were taken into custody after a fierce shootout in the capital on Wednesday morning. The identities of those killed and captured have not been released.

The police say other members of the hit squad are at large, while the Dominican Republic has closed its border with Haiti.

Interim Prime Minister Claude Joseph has declared a national "state of siege" and said the killing will not go unpunished.

He has said he will take control until new elections can be held, but there is no certainty this arrangement will be accepted.

Joseph had been due to step down after Moise on Monday announced the appointment of a new prime minister, French-trained neurosurgeon, Ariel Henry.

In an interview with Le Nouvelliste Haitian daily, Henry said he was the rightful prime minister.

Under Haiti's constitution, the president of the Supreme Court is to take over in the event of a presidential vacancy, however Chief Justice René Sylvestre died of Covid-19 weeks ago.

'Cowardly' assassination
Magistrate Carl Henry Destin told Le Nouvelliste that Moïse's body was found riddled with 12 bullet holes, and that his left eye had been gouged out.

France condemned the assassination on Wednesday, describing it as "cowardly".

Political instability
It is unclear who was behind the assassination, though Moïse had many political enemies.

He went through seven prime ministers in the space of four years and had governed by decree, with no checks since 2020.

He had faced difficulties soon after taking power in 2017, when protests triggered by fuel shortages turned violent.

Then in 2019 court auditors investigating the whereabouts of $2billion in aid from a Venezuelan oil fund found that companies run by Moïse before he became president were at the centre of an embezzling scheme.

Moise insisted he could stay on as head of state until February 2022, but opponents rejected his interpretation of the constitution.

Legislative elections due in 2018 were delayed by disputes, and Haiti was due to hold a constitutional referendum in September after it was twice postponed due to the coronavirus pandemic.

First black republic
Political turmoil has hampered Haiti for decades.
The country's wealth was built on the back of slaves, and it was once France's richest colony – until it became the world's first black-led republic in 1804 after a revolt by slaves.

Since its independence, the people of Haiti have suffered a succession of brutal dictatorships, interrupted only by brief stints of democracy and foreign occupation.

Driven out by a popular revolt, Baby Doc went into exile in France for 25 years before returning to Haiti in 2011, where he died three years later.

But he was later overthrown in a coup, reinstated, ousted a second time and finally sent into exile under pressure from the United States, France and Canada.

Poverty, natural disasters
With more than three-fifths of the population of 11.4 million living on less than two dollars a day, Haiti is among the poorest countries in the world.

Most Haitians to not have access to basic healthcare, and it is one of the few nations in the world which has not yet started its anti-Covid vaccination drive.

But as well as poverty, the Caribbean nation is also particularly prey to vulnerable to disasters.

More than 10,000 then died in a deadly cholera epidemic introduced by infected Nepalese UN peacekeepers sent in after the disaster.

A further 500 people died when the country was hit by Hurricane Matthew in 2016. It also caused $2 billion in damage.