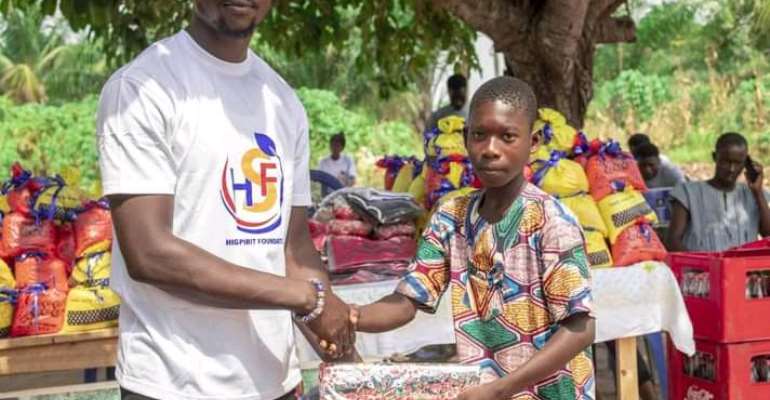 High Spirit Foundation, a Non-Governmental Organization has supported pupils of Aveyiborme Basic School in the Ketu North Municipality of the Volta region with some items to help improve teaching and learning.

Items include 110 schools uniforms, 8 school bags, boxes of pencils, rulers, erasers among others worth hundreds of cedis were presented to the school by the group on Wednesday, July 7.

Mr Believe Gatogo, the Chief Executive Officer of High Spirit Foundation disclosed to ModernGhana News that their support for the Aveyiborme basic school was born out of a survey they conducted some months ago which revealed that some pupils from the school were finding it difficult to learn.

He said it is the core mandate of the NGO to support schools in the area with the needed items.

"We are going to support many other schools that are also in need to address many educational problems", he stated.

He stated that any individuals or philanthropic group who may wish to help the school children can collaborate with them to solve the many problems confronting education in the area.

Mr Godwin Morgan Ahiaxornu, Headmaster of the Aveyiborme Basic School who received the items on behalf and the teachers and pupils thanked High Spirit Foundation for the kind gesture.

He appealed to individuals, philanthropists and capable old students of the school help address the teething problems facing the school since government cannot do it all.

"We don't have enough textbooks, tables and chairs, and some pupils do not have enough exercise books for learning", he continued.

Mr Paul Geli, Assemblymember for the area who also witness the program also thanked the group for helping improve education in the area.

He told ModernGhana News that the donation were the kind of support they have been appealing for and the timely intervention by the High Spirit Foundation group was commendable.

Alorsode Atsu, the school prefect of the Aveyiborme Basic School on behalf of his colleague pupils express happiness and thanked the NGO for the support.

He promised they will use the items well to their benefit.