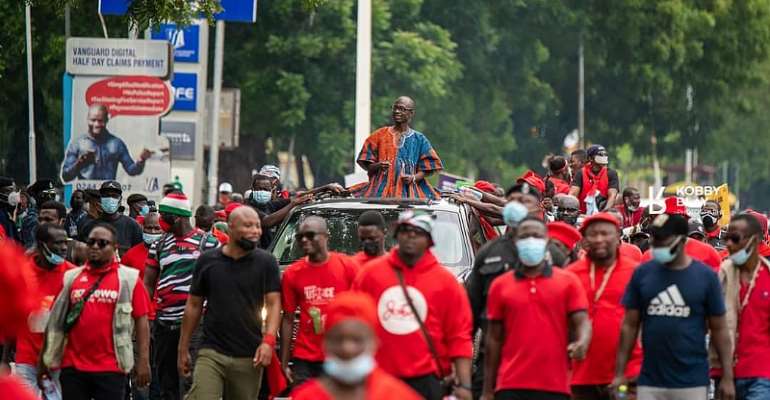 The Youth Wing of the opposition National Democratic Congress (NDC) has petitioned the Speaker of Parliament, Alban Bagbin, to order a bipartisan inquiry into brutalities against civilians by security agents.

In a 20-points petition, the group also called for immediate reform of the security agencies, including their training to enable them operate effectively.

The group presented the petition to the leadership of Parliament in Accra, when it embarked on a “March for Justice” demonstration on Tuesday.

The demonstration was to demand justice for all persons killed or brutalized by various security agencies in the country.

Presenting the petition to the leadership of Parliament, Deputy Youth Organiser of NDC, Ruth Dela Sedor, said since the advent of the Akufo-Addo/Bawumia government, there had been high levels of violence, impunity and lawlessness meted out on innocent citizens by both state and non-state actors, adding that those violent attacks, resulted in the deaths of about 10 civilians.

“The latest installment of these violent attacks took place only last week at Ejura and Wa. At Ejura, unarmed protesters expressing their disquiet about the unceremonious assasination of a prominent youth activist, Mohammed Kaaka, were set upon by armed soldiers and shot at, resulting in kthe deaths of two persons.

“In Wa, dozens of soldiers without any provocation, embarked on an indiscriminate assault of anyone in sight over the alleged stealing of a mobile phone belonging to one of their kind,” she said.

She noted that these killings followed several other instances of abuse of citizens by regime actors including the an alleged attack on NDC members by balaclava-wearing New Patriotic Party's bandits clad in National Security apparel during the Ayawaso West Wuogon by election.

“We also recall the dastardly attacks on a Court in Kumasi by NPP militants calling themselves Delta Force who had earlier attacked the then Ashanti Regional Security Coordinator and the storming of the Chamber of the August House of Parliament by armed Military personnel on the night of 6th January, 2021 during your election.”

Madam Ruth Sedor added that other notable incidents such as the manhandling and torture of journalists and critics of the present government had gone unpunished with the perpetrators completely left off the hook.

She said those attacks were a product of the deliberate mismanagement and militarization of the country by the current government to instill fear and anxiety in the citizenry.

“To this end we demand an immediate removal of all bandits and party thugs integrated into the country's security agencies and also, a full-scale bipartisan Parliamentary inquiry into all the incidents recounted in our petition and a faithful implementation of all recommendations especially the punishment of all perpetrators,' she added.

Other demands are: the holding to account of all relevant government officials who have failed to act in the face of glaring evidence in the cases we have recounted, the compensation of all surviving victims of the brutalities and the families of all those who have lost their lives as a result and the exacting of a clear commitment from the President to uphold the constitution and laws of Ghana and the prevention of subsequent acts of lawlessness and impunity by elements of his party and government.

Majority Leader, Osei Kyei Mensah-Bonsu, who received the petition on behalf of the Speaker, who was out of the jurisdiction, said Parliament, after the return of the Speaker would initiate processes to look into the petition.

He commended the organisers for a peaceful demonstration, saying the right to assembly and the right to demonstrate were enshrined in the Constitution.

Hottest Photo Reports
Catch up with all the political quotes from our politicians.
Advertise here
More NDC News
ModernGhana Links
Election 2024; NDC needs a fresh candidate to claw back power - Dela Coffie
Calling on gov't to complete your projects is an endorsement of NPP's 'break the 8' agenda for 2024 — Stephen Atubiga to NDC
Withdraw fraudulent suspension of Salaga South Constituency Executives immediately — Concerned NDC Supporters
‘Give us our harbour or resign for being unfaithful, untruthful’ – Cape Coast NDC tells Akufo-Addo
“Even those who lost elections are thanking people, what are their problems with me inspecting projects?” – Akufo-Addo jabs NDC
We appalled by machiavellian tactics to get MCE nominees confirmed — Western North NDC
2020 polls: We could've also gone on promise spree like NPP – NDC
Tell your family and friends choking the payroll to forfeit their juicy jobs and go into entrepreneurship — NDC’s Basintale
NPP no match for NDC, we'll win 2024 elections hands down – Ofosu-Ampofo
TOP STORIES