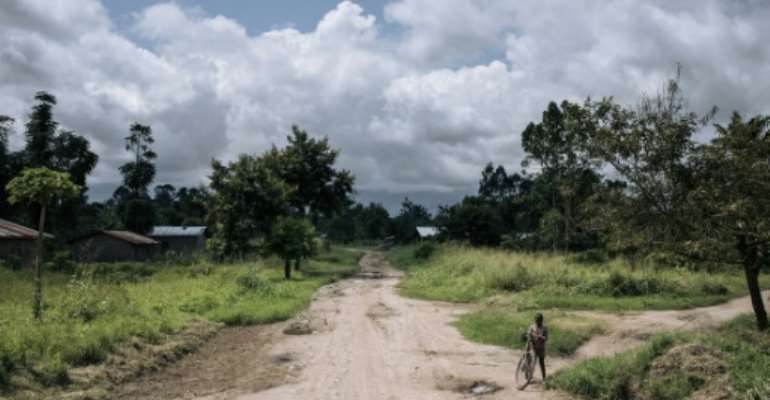 Deserted: A boy rides a bicycle at the entrance to the town Mutwanga. Many residents have fled their homes because of attacks. By ALEXIS HUGUET (AFP/File)

Mado was worshipping at an evangelical church in the town of Ndalya in February when her life changed forever.

Gunmen burst in, killed her two-month-old daughter at point-blank range, ordered her to leave the baby's body on the ground and follow them out along with the other worshippers.

The young woman had become a hostage of the Allied Democratic Forces (ADF) -- the bloodiest and most dreaded of the many armed groups that roam eastern DR Congo.

The baby's killer said "now you won't be weighed down anymore," Mado, whose name has been changed for this article, recounted between sobs.

They made her carry a heavy package on her head through dense forest until the group came to a halt in a clearing.

It was prayer time for their jihadist captors.

Later, at meal time, the group was divided into four: the commanders, the combatants, the fully veiled women accompanying them, and the hostages under close guard.

After a four-day ordeal, Mado was freed.

Today she lives with a host family in Beni.

The rise in bloody attacks in eastern Democratic Republic of Congo has coincided with ADF"s affiliation to the so-called Islamic State (IS). It has become the latest armed group in a jihad that extends from the Sahel to Somalia and from Nigeria to Mozambique.

The ADF's long but murky story begins as an armed Ugandan Muslim group that holed up in eastern DRC in 1995.

It has not carried out any attacks in Uganda itself for years and lives off extortion and control over the region's abundant resources.

These are classic tactics used by the myriad other armed groups that operate in the area -- the Kivu Security Tracker (KST) monitor estimates their number at 122 -- flourishing on the ashes of the country's two great wars from 1996 to 2003.

But in March, the United States officially linked the ADF to the IS and identified its leader as Seka Musa Baluku. It said the ADF had become IS' "Central Africa Province" -- an entity that the IS declared in April 2019 as it was losing ground in Syria and Iraq.

In two written claims that circulated in late May, the ADF used rhetoric typical of IS and other jihadi groups, speaking of wanting to target "crusaders" -- a reference to Christians, in their view infidels.

The DRC's Catholic Church says the ADF has massacred around 6,000 civilians since 2013, a toll that has risen sharply since 2019, when the militia appears to have become more radicalised.

Casualty: A man wounded in one of the attacks in the Beni area is treated in a Red Cross hospital. By ALEXIS HUGUET (AFP/File)

On June 30, the IS claimed responsibility for the DRC's first suicide bombing -- a blast outside a bar in Beni three days earlier that was preceded by an explosion in a Catholic church, injuring two women.

Beni lies in the heart of ADF territory, which stretches east to the Rwenzori mountains on the Ugandan border and north towards neighbouring Ituri province.

Highway of danger: The road from Beni to the Ugandan border has suffered dozens of attacks since last December. By ALEXIS HUGUET (AFP/File)

The 45-kilometre (28-mile) drive on a dirt road under military escort from Beni to the Rwenzoris takes two hours, with modest army posts positioned at intervals along the way.

The threat is palpable.

Dozens of villagers have been massacred since the start of the year in attacks that typically occur at night.

Often the victims are decapitated with machetes, their arms tied behind their backs.

Witnesses of one attack, whose location and date are not being revealed by AFP in order to protect them, said the ADF tied up several hostages including one whose head was then cut off.

One said the ringleader shouted in Swahili, the dominant language of East Africa: "If you cut off the heads of these kafirs (infidels) in the name of Allah, He will be happy and you will be rewarded."

The others were then executed in turn.

AFP was also able to interview two individuals presented by the army as ADF fighters.

Ruins: A store in Mutwanga that was looted and burned during a recent attack. By ALEXIS HUGUET (AFP/File)

Arafat and Moshoud -- their names have also been changed -- are Congolese who speak Lingala, the country's most widely spoken language.

They were arrested in December and February respectively and were being held in a safe house in Beni, police said.

They have provided valuable information on ADF's organisation and recruitment practices, according to their handlers.

Arafat, 19, said he cooked for Baluku, the much-feared Ugandan who heads the ADF.

He described the chief as an "authoritarian and disciplined man" who likes goat meat -- "especially the entrails".

Tasks are handed out by national origin: "The Somalis teach the teenagers how to make home-made bombs. The Tanzanians and Ugandans are in charge of military training and teaching the Koran," said Moshoud.

The 23-year-old Muslim from Oicha, near Beni, said he was recruited in 2017 and that Baluku made him the commander of an 85-strong company.

"I was responsible for transferring money to ADF accomplices and collaborators in charge of recruiting new members," he added.

Justice is harsh in the ADF's jungle or forest camps, some of which are temporary, others semi-permanent, they said.

A fighter accused of embezzling part of funds earmarked for recruitment was convicted by a tribunal of Ugandan and Somali chiefs.

"His left hand was cut off," Moshoud said.

A couple caught having sex were each given 100 lashes because they were not married, he said.

Arafat, who said he witnessed the whipping, added: "If it had been adultery, the man would have been stoned to death."

Wherever Baluku sets up camp -- always dubbed "Medina" in reference to Islam's second holiest city -- the day revolves around the five prayers required by Islam.

"We rise at five in the morning for prayers," said Moshoud. "Then the chiefs assign tasks and missions: patrols for some, ambushes for the others."

"Everyone returns to base at noon for prayers. We also pray at 3, 6 and 7 pm," Arafat said.

"Before going on an operation against (the army) or civilians, we first do the 'doua'," Moshoud said, referring to an invocation of Allah.

The ADF recruits Congolese members from around North Kivu, even though the province is minority Muslim like the rest of the country. They are recruited by force, through promises of jobs or through propaganda, according to UN experts.

Survivors of attacks confirmed the testimony of Moshoud and Arafat.

They said the assailants speak several languages including Arabic and Kiganda (spoken in western Uganda), as well as Lingala and Swahili.

A nurse at Beni General Hospital shows an X-ray of a patient shot during an attack on a mining site. By ALEXIS HUGUET (AFP/File)

Their style of dress is eclectic, some wearing parts of stolen army uniforms, some wearing Muslim skullcaps and others sporting military caps.

Still others tie scarves around their heads, witnesses have told AFP.

To identify themselves among unknown comrades during attacks they wear a piece of cloth of a designated colour around an arm, a wrist or the forehead.

As they attack, the ADF men loot everything in their path: telephone kiosks, stores of soap, rice, corn, also called maize, and medicines.

Like other armed groups, they are interested in the region's resources, but go for timber and cocoa more than minerals.

The nine kilometres (six miles) between the town of Mutwanga and the village of Mwenda, deep in the forested foothills of the Rwenzoris, are dotted with hamlets that have been emptied of their residents, weeds taking over the deserted homes.

"My children are in Beni," some 45 kms distant, a farmer says under the gaze of an army officer.

"I spend the night here on my own so I can tend to my fields. I hope the army is here to secure" the area.

In Mwenda, the army says it has "advance positions" against the ADF -- simple wood huts covered with tarps -- while command posts are set up in old administrative buildings.

A forward base set up by the DRC army and rangers from the Virunga National Park on the outskirts of Mutwanga. By ALEXIS HUGUET (AFP/File)

As if reciting by rote from a manual, a major says: "Our mission is defensive, with fixed positions to protect the population. Every time a case is reported we go out in pursuit of the enemy."

An army offensive launched in November 2019 set off a wave of reprisals.

On May 6, President Felix Tshisekedi decreed a "state of siege" in North Kivu and Ituri, vowing to stamp out the armed groups, the ADF in particular, which he described as having an "Islamist leaning".

But has the new tack -- which has seen the military take over local institutions -- helped the rank-and-file soldier?

At the Mutwanga command post, an officer said he had seen little progress in the way of uniforms, rations and munitions. "We just pray that it will come," he smiled.

Meanwhile the ADF are perfecting their methods.

Various sources said they use surveillance drones -- what Mado thought were "toys" that they "sent up into the sky".

Especially worrying is an uptick in the use of improvised explosive devices (IEDs), according to UN experts.

Attesting to the increased firepower were three bomb attacks in Beni over a single weekend.

Two women were injured in a June 27 attack at a Catholic church ahead of a confirmation ceremony, and a suicide bomber blew himself up outside a bar hours later.

The previous day saw a bomb attack outside a petrol station on the outskirts of Beni, with no casualties.

'Grateful to be alive'

Muslim leaders are increasingly under pressure from military chiefs to respond to the bloodshed.

Muslim worshippers gather for Friday prayers at a mosque in Beni. By ALEXIS HUGUET (AFP/File)

But the community's leader, imam Hamza Mali Wasingenga, whose predecessor was shot dead, said: "We Muslims of Beni are massacred just like the Christians. The authorities should stop associating us gratuitously with these people, who kill with no concern for the religious affiliation of their victims."

While the ADF is seen as far and away the leading cause of violence in the region, many residents also point the finger at local militias known as Mai-Mai, as well as corrupt soldiers.

In May, two officers were placed in detention over accusations of being in league with ADF fighters, according to an army spokesman.

Many also wonder whether some business owners use the deadly tactics of the ADF to eliminate rivals, blaming their disappearance on the ADF.

In Mutwanga, a few men gaze at what is left of a shop that was looted and torched in a recent attack.

Desolation: Fabiola Mbambu Kambere survived an attack on the village Nzenga but her home was destroyed. By ALEXIS HUGUET (AFP/File)

"We don't understand this war," sighed Musa Kakule, a cocoa farmer who was forced off his land.

"We don't know if the ADF come with the specific idea of killing people or not. The only thing we know is that through God's grace, we are here, together, alive."

$200 million Saglemi scandal: Funds were not directly given ...
25 minutes ago

Policy saturation, failure fatigue and frustration can make ...
59 minutes ago