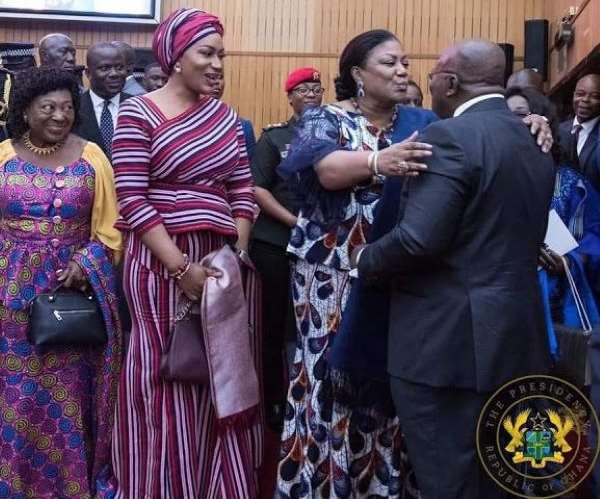 The National Democratic Congress (NDC) tells President Nana Akufo-Addo that his decision to pay his wife, First Lady Rebecca Akufo-Addo and Mrs Samira Bawumia, wife of the Vice-President, salaries equivalent to those of cabinet ministers shows that “clearly, you’ve lost it”.

“In the world all over, governments are elected to work for people and not otherwise. Your Excellency, your government is not working for the generality of Ghanaians but a select few, mainly family members and cronies”, the petition presented to the Jubilee House during Tuesday march for justice said.

It noted: “With each passing day, you and your government manifest more examples of insensitivity to the cries of Ghanaians”, adding: “The latest being your decision to pay your wife Rebecca and Samira Bawumia salaries equivalent to cabinet ministers at a time like this. Clearly, you have lost it”.

The party’s march was to demand justice for lynched social media activist Ibrahim Kaaka Mohammed and the subsequent killing of two demonstrators who were marching for justice for the slain activist.

They were shot by soldiers who were helping the police to dispel the demonstrators.

Read the full petition below:

The framers of the 1992 Constitution were spot on when they made provision in clause 1 of article 1 that "the Sovereignty of Ghana resides in the PEOPLE OF GHANA in whose name and for whose welfare the powers of government are to be exercised in the manner and within the limits laid down in this Constitution."

In the strict adherence to the meaning of this provision, Your Excellency, you took the presidential oath on January 7, 2017, when you were first elected President of the Republic.

Although our party, the NDC contested the general elections which was subsequently decided in your favour by the Supreme Court of our Republic, you took the same oath on January 7, 2021, to serve another four-year term. The Presidential oath, as we know it, was not and cannot be fanciful words said for purposes of formality.

Despite the polarised nature of our country, Ghanaians who voted for you, and indeed, those who voted for your opponents succumbed to our Constitutional arrangements and entrusted their will and aspirations in your hands.

The hopes of every Ghanaian, including your political adversaries, was to see you uphold the tenets of our Constitution, sustain the peace you inherited from your predecessor, improve upon the economic wellbeing of Ghanaians, fight corruption ruthlessly, provide decent employment for the youth in particular, and ensure the safety of everybody, amongst other things; needless to say, these were the very teething issues you campaigned on and promised to deliver.

Your Excellency, without mincing words, it is heart-wrenching to state that your government has so far delivered the antithesis of almost all what you promised Ghanaians.

It cannot be gainsaid that if you objectively and sincerely looked back, reflect on the state of the country bequeathed to you and what you have done with it in five years, you have eroded almost all the strides our country have made. If our country was a clock, you have rolled it anti-clockwise.

Though our country was riddled with some age-long challenges before you took over; issues of corruption, unemployment, nepotism, cronyism and insecurity among other things, have increased unimaginably.

You will agree with us that our country needs fixing and there cannot be any good time to fix it than now.

The danger, Your Excellency, is that there is no commitment from you and your government that these life-threatening challenges facing our country will be, at least, reduced.

Instead of teaming up with those who have taken inspiration from your edicts to be citizens and not spectators to fix the country, your government is surprisingly averse to calls asking for the fixing of our beloved country.

Those crusading for the country to be fixed have become enemies of your government as they are either being intimidated, harassed or killed.

Respectfully, Mr President, it is not out of place to point out to you that, though Ghanaians signed a social contract with you to resolve their problems, your government has become an insurmountable challenge that they are struggling to resolve.

Objective minds in our nation and those in your own government whispering on corridors have growing apprehension about where you are leading this dear country of ours. The leadership you have provided so far is one of "let's finish everything today because there is no tomorrow."

There is no hope for the youth under your stewardship. The very people you promised to protect are the ones being beaten and/or killed daily by thugs recruited into our security services, those you promised jobs have either been laid off, lost their investments or have not been employed at all.

You have failed to build a just society. Today, more than ever in the history of the construction of our state, access to the few opportunities is solely based on possession of an NPP party card.

Those you promised infrastructural development have either have what your predecessor started abandoned by you or not seen any infrastructure at all. Perhaps, the best thing about your government is how far your family members and cronies are feeding on the national kitty to the chagrin of all of us.

The case of students, nurses, teachers, tailors, carpenters, Okada riders, trotro drivers, doctors, Masons, lawyers, traders, civil servants, farmers, to the last man on the street, has been of agony, pain and sorrow.

There is simply no hope in sight. In the world all over, governments are elected to work for people and not otherwise. Your Excellency, your government is not working for the generality of Ghanaians but a select few, mainly family members and cronies.

With each passing day, you and your government manifest more examples of insensitivity to the cries of Ghanaians.

The latest being your decision to pay your wife Rebecca and Samira Bawumia salaries equivalent to Cabinet Ministers at a time like this. Clearly, you have lost it.

The country our forefathers laboured at the peril of their lives to build for us cannot be gambled with and treated this way. Without sounding exaggerative, where you have led the country to, points to a direction that we urgently need liberation from the ills of state powers which must start from the seat of government; we are not lost at all of the powers allocated to the executive arm of our government and its authority to change things for the better.

The ills of your government are just too many to mention but of course you cannot be bothered. You fulfilled a long-held ambition to be President and that is what appears to matter to you most.

Though it sounds needless to remind you of your pledge and campaign messages to the good people of Ghana, it is worthy to make the following demands:

1. Immediately, implement recommendations of the Emile Short Commission of Inquiry Report forthwith. In particular, pay compensations to all victims and direct the Attorney General to prosecute all culprits.

2. Beyond investigating all acts of violence perpetrated by officers of the security agencies under your watch, ensure that all victims get justice as required by law. Victims of acts of violence from Ejura, Ablekuma Central, Odododiodioo, Banda etc., must all not be denied justice.

3. Make provisions towards providing decent jobs for the teeming youth of the Country through proper structural economic reforms and business support for enterprises of young people.

4. Ensure the safety and security of all Ghanaians

5. Stamp out corruption by prosecuting corrupt officials in your government other than shielding them. We ask that there is a fierce urgency to halt the hopeless nature of cronyism that has crept into the Government.

6. Take steps to fulfil campaign promises to the good people of Ghana and be respectful and truthful to the citizenry.

7. De-politicize the Security Services introducing reforms to give true meaning to its independence. We charge that these reforms be led by experts in our country and not partisan appointees.

8. Instruct the Attorney General and the Minister of Justice to improve the justice system and Wean the Judiciary off partisan political influence.

We count on your fail-safe commitment to our nation as its President in this historic moment.

Written for and on behalf of the Youth of Ghana.

Ablakwa making noise about Akufo-Addo’s flights for politica...
27 minutes ago