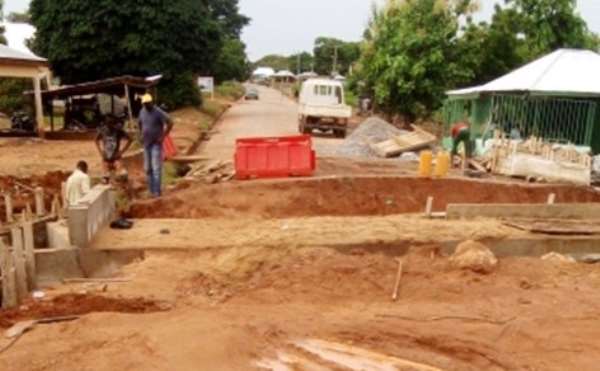 Following a report by Modernghana News' Ezekiel Abdul Aziz about a caved in culvert on the Damongo-Canteen road in the West Gonja Municipality of the Savannah Region last month, the Ghana Highways Authority has commenced construction works on the damaged culvert to fix the situation.

Residents using that stretch of the road were happy to see the authorities fixing the culvert.

In an interview with Modernghana News, some residents said the reconstruction of the culvert will bring massive relief to them. They added that it will also bring an end to the annual flooding of the road.

A commercial tricycle user who identified himself as 'X dollar' said, "now it will make our travelling short and faster. The situation forced us to use other routes to and from Canteen. The way they are constructing it, am sure it will prevent subsequent flooding".

They however appealed to the contractor to speed up their efforts and also ensure the construction of the culvert stands the test of time.

The 12 meters pipe culvert reconstruction, is set to replace the underground culvert which caved in on Saturday, May 1, 2021 after a heavy downpour.

The caved-in culvert which occurred at about 7pm on the said date, brought about inconvenience to motorists and commuters.

Residents at the time attributed the collapse of the over two-decades-old culvert to torrential rain and the weight of overloaded heavy-duty trucks that ply that part of the road.