Stop The Military Brute, Respect The Rights Of Ghanaian Citizens 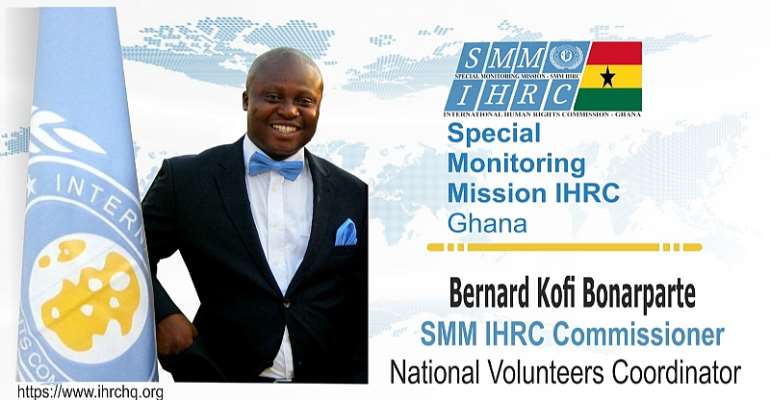 The recent happenings in our country by military men unleashing harsh and unprofessional means of silencing well-meaning Ghanaians from their constitutional rights of expressing their grievances through peaceful demonstrations is uncalled for.

The Public Order Act of the 1992 constitution of the Republic of Ghana “ACT 491” clearly mandates all citizens of age to freedom of association and of peaceful demonstrations. No person or persons who require to demonstrate through a peaceful and harmless means should ever be denied by the state agencies. The Police administration is expected to direct and protect all peaceful demonstrators through tit a tit between the formal and the group seeking to express their constitutional mandate.

The Commissioner and National Volunteers Coordinator of the Special Monitoring Mission of the International Human Rights Commission- Ghana Amb. Bernard Kofi Bonarparte has made this call for an immediate end to the recent brutal and unprofessional means of preventing Ghanaian citizens from coming out to protest. This is uncalled for he said.

Since 8th March 1957, Ghana was admitted to the United Nations, two days after it achieved independence from Britain. Ghana was previously known as the Gold Coast under British rule since 1821 and successive Governments have had their turn of citizens expressing their views to issues by “Peacefully demonstrating on principal streets except just this year a turn of revolution forfeited the status co by using the power of the social media and internet to hold virtual demonstration that took everyone by surprise.

Amb Bernard indicates that majority of Ghanaians are law-abiding citizens who respect the constitution which governs the state therefore some Government appointed officials should not abuse incumbency by using the security forces against its own people.

The recent military brute has caused the lives of many breadwinners in Ghana leaving the immediate family members in destitution. On May 11 1995. , His Excellency President Nana Addo Danqua Akufu Addo led a peaceful demonstration canvassing over a 100,000 people coming from the length and breadth of Ghana campaigning against hardship and crucial economic unrest and after 26 years He ( H. E Addo ) is facing the same.

The Commissioner has called on the president of the Republic HE Akufu Addo and all stakeholders ie CHRAJ , Peace Council , Chief of Defense Staff , Inspector General of Police and all asunder to investigate and sanction all culprits of these crimes against Humanity and its existence to avoid future occurrences in other to win the trust and confidence of its citizens.

IGP bow out
5 minutes ago