Mini Statue of Liberty arrives in the US, retracing big sisters' steps 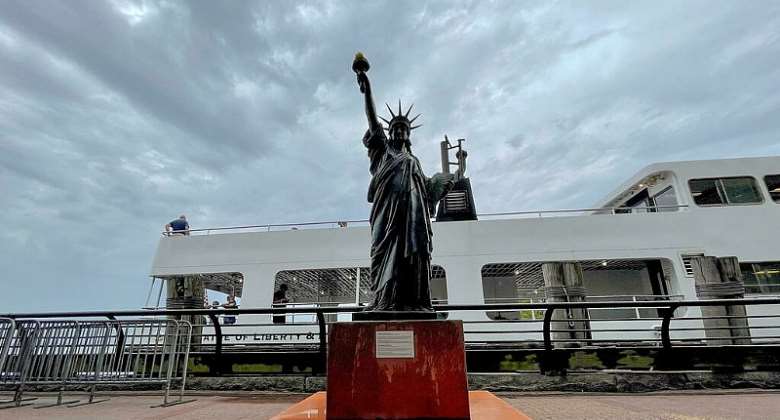 A scaled-down replica of the Statue of Liberty that has retraced the journey made over a century ago from France by its big sister was erected on Ellis Island in New York Harbor this week in time for national celebrations.

The replica, which stands 2.8 metres tall, began its trip from France to the United States last week.

On Thursday, workers gently uncovered the plastic film used to protect the statue in its trip across the Atlantic.

The work is being loaned by the Museum of Arts and Crafts in Paris to the United States for 10 years, in a gesture aimed at cementing Franco-American friendship.

"Enlightening the world"
“It is a symbol of the friendship between the French and the American people, but it is also a reminder of the importance of the message of liberty and enlightening the world, which is the name of the statue,” said Philippe Étienne, French ambassador to the United States, at an inauguration ceremony.

“It is the essential importance of freedom in our democracies, inside our societies and also in the world.”

The larger version of the Statue of Liberty, which stands at 93 metres, including the base, was given by France to the United States as a gift. It was assembled in 1886 and has been on Liberty Island in New York Harbor ever since.

The 450kg bronze replica was crafted from Frédéric-Auguste Bartholdi's original Statue of Liberty plaster model and will be displayed on Ellis Island from 1 to 6 July, so it will be in New York for the 4 July Independence Day celebrations.

It will then move to Washington.
“We found it so important to have this meeting between the little and the big sisters, especially on the 4th of July, and then on the 14th of July – which is our national day, Bastille Day – it will be inaugurated again, but in Washington,” said Étienne.