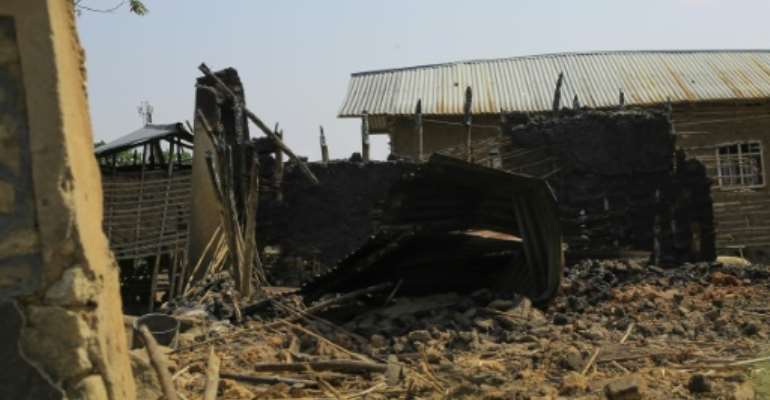 It was the first ADF attack in the Rwangoma neighbourhood since December 2019, angering residents. By SÃ©bastien KITSA MUSAYI (AFP)

Suspected members of a feared Islamist militia killed 10 people in the eastern DR Congo city of Beni overnight, the army said Thursday, prompting an anti-government protest with youths parading a victim's body in the streets.

An AFP correspondent saw 10 bodies in the morgue of Beni's general hospital.

Local residents were shocked by the first attack in the district since December 2019.

Angry youths marched on the town hall, carrying a victim's body and shouting slogans questioning the point of a "state of siege" imposed on May 6 with the aim of quelling ADF violence in North Kivu province as well as Ituri province to the north.

Shops stayed shut and people were in shock after the first attack in the area since late 2019. By SÃ©bastien KITSA MUSAYI (AFP)

"We thought it was the light at the end of the tunnel, this state of siege," Rwangoma resident Samuel Kalume told AFP.

"But after 18 months without an attack by the ADF in our neighbourhood, we're back at square one. It's very discouraging."

Under the "state of siege" proclaimed by President Felix Tshisekedi, senior civilian officials have been replaced by army officers.

The last attack by the ADF in the Rwangoma district, in December 2019, was in reprisal for an army operation against the militia. Around a dozen people were killed including two soldiers.

DR Congo's armed forces are struggling to stem an escalating campaign by the ADF, which the US links to Islamic State. By Alexis Huguet (AFP)

The one before that was three years earlier, in August 2016, when around 50 people lost their lives.

At midday, Rwangoma's shops, schools and offices were closed and the streets were largely deserted.

The ADF is the deadliest of an estimated 122 armed militias that roam the mineral-rich east of the Democratic Republic of Congo, many of them a legacy of two regional wars from 1996 to 2003.

According to a tally compiled by the DRC's Catholic Church, the ADF has been responsible for at least 6,000 deaths since 2013.

The Kivu Security Tracker monitor says the ADF, originally from Uganda, has killed more than 1,200 civilians in the Beni area alone since 2017.

On March 10, the US State Department branded the ADF a "foreign terrorist organisation" and said its leader Musa Baluku had pledged allegiance to the Islamic State group.

But experts are still unsure about the extent of links between the ADF and IS, which has lost most of its territory in the Middle East but is expanding in Africa.

Last weekend, there were three bomb attacks in Beni including the first targeting a Catholic church building and the first suicide bombing in the region.

IS claimed responsibility for the suicide blast and the church attack, as well as three other attacks on security forces in Ituri province, according to SITE, a jihadist monitoring site.