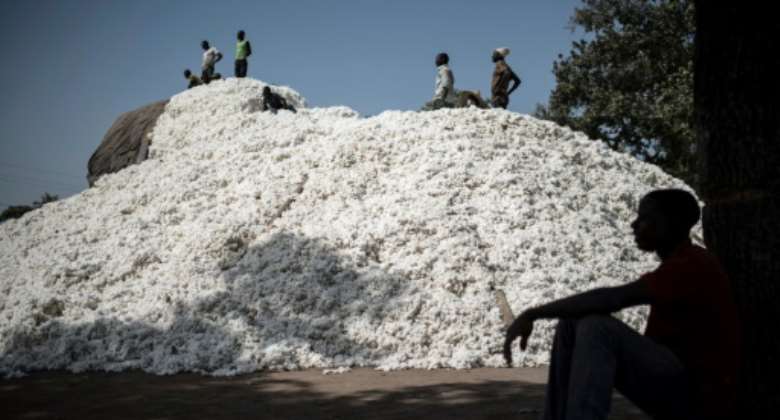 Harvest time: Togo and Benin are looking to cotton to create jobs in their agriculture-dependent economies. By Stefan HEUNIS (AFP)

In a bold but contested strategy, the West African state of Togo has bet heavily on the private sector to revive its struggling cotton industry.

"White gold," as cotton is sometimes called, accounts for only between one and 4.3 percent of the country's GDP, bringing 500,000 jobs for a population of 8.8 million.

Yet cotton also has huge potential in terms of job creation, especially for the poorest and smallest producers in the marginalised north.

Eyeing the success of privatisation in neighbouring Benin, Togo last December sold a majority stake in its largest cotton producer, the New Cotton Company of Togo (NSCT), to a Singaporean giant.

"At least 40,000 cotton producers out of 153,000 abandoned their fields this last season," said Koussouwe Kouroufei, president of the National Federation of Cotton Farmers' Associations (FNGPC).

The 2020-21 harvest suffered from "poor seed quality and bad weather in the north of the country," NSCT chairman Simfeitcheou Pre said.

The transformation has been engineered by Benin's President Patrice Talon, a tycoon known as the "Cotton King" before he was elected in 2016.

Benin is now the biggest cotton producer in the region, with the sector making up 12 percent of GDP.

Owned by Japan's Mitsubishi and Singapore's sovereign fund Temasek, Olam International is present in 60 countries, with a hefty focus on agri-business in Africa.

The state of Togo has retained 24 percent of NSCT shares and the farmers' association 25 percent.

Under its new terms of operation, NSCT will be responsible for all cotton activities in the country, including supporting producers with fertilisers, ginning and sale.

The company says it will raise the floor price of raw cotton to 254 CFA francs ($0.46) per kilo to encourage production. International cotton prices have rebounded this year, peaking at 93 cents per pound (0.45 kilo) in February -- almost double from its lowest point in 2020.

A processing factory is also being built in a new industrial zone, Adetikope, about 20 kilometres (12 miles) south of the capital Lome, with a capacity to transform 5,000 tonnes of fibre by 2022 and 25,000 tonnes over the new three years.

"We are hopeful that the new season will offer brighter perspectives for the entire industry," Martin Drevon, deputy director general in charge of operations at NSCT, told AFP.

But some fret about the long-term impact from opening the door to multinational giants. They fear a loss of sovereignty.

"If we don't step up, in five years all of Togo's cotton will be in the hands of this group," said Emmanuel Sogadji, president of Togo's consumer association (LCT).

"And it's not just cotton. It's the same for soy and other agricultural products. Even in a liberal economy, we should promote domestic investors."