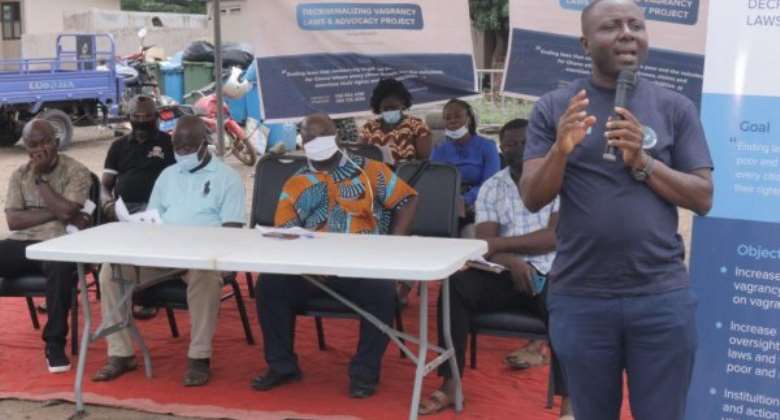 Dr George Asekere, a Political Science Lecturer at the University of Education, Winneba is asking the Metropolitan, Municipal and District Assemblies (MMDAs) to review bye-laws that criminalised poverty and stifle economic activities of vagrants.

He urged the Assemblies to be sensitive in meting out punishment to the vagrants, who due to poverty and ignorance and violated the local bye-laws.

Dr Asekere was speaking at a sensitization workshop on the bye-laws of the Ashaiman Municipal Assembly at the Ashaiman Mandela Park.

The sensitization was organized by Crime Check Foundation (CCF) as part of the implementation of the CCF-OSIWA partnership dubbed: “Decriminalizing Vagrancy Laws and Advocacy” project.

The project seeks to create an enabling environment for vagrants to know, claim and exercise their rights and responsibilities in Ghana.

He called on the MMDAs to make realistic bye-laws for the sake of the poor and the vulnerable in society, adding that many bye-laws enacted seemed to target a certain group of individuals, especially vagrants (the homeless, street hawkers, head porters, vendors, truck pushers, market women, artisans, among other vulnerable groups) who were normally ignorant of their rights and responsibilities under the local government bye-laws.

“When you are enacting bye-laws, consider your particular situation so that the laws you enact benefit the people in your locality because most of the bye-laws give too much power to a certain government institution, knowing very well that these vagrants are ignorant of their rights,” he said.

Mr Ibrahim Oppong Kwarteng, the Executive Director of CCF, called on the vagrants to balance their rights with their responsibilities.

He said that the initiative was not to incite vagrants against the authorities but to empower them to work hand-in-hand with the local authorities in increasing knowledge of the laws to reduce arrests, fines and imprisonment of vagrants.

The Executive Director said, “vagrants must know their rights, but not to rise against authorities. They must also know their responsibilities as citizens and do as they are required.”

Mr Azonga Ananga Ayangiba, the Presiding Member for the Ashaiman Municipal Assembly, commended OSIWA and CCF for the initiative, which he believed, would greatly complement the efforts of the Assembly to increase citizens' knowledge of the bye-laws for compliance, and reduction in violations, fines, and imprisonment.

The project, which runs from May 2021 to May 2022, is being rolled out in 12 Metropolitan Assemblies in three regions of Greater Accra, Ashanti, and Central.

The programme brought together officials of ASHMA, Media, and the leadership of various informal sector groups such as market women, truck pushers, transport associations, beauticians, hawkers, waste contractors, and the Ghana Federation of Disability.

Ghana confident of closing balance of payment deficit as NTE...
4 hours ago