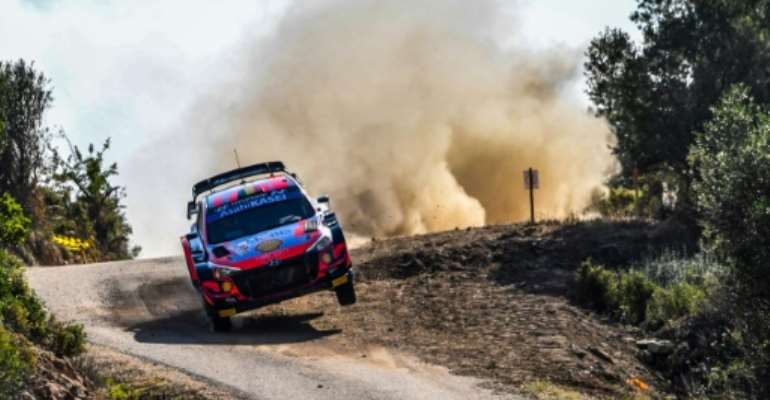 Thierry Neuville steers his way to the lead in the Safari Rally after a challenging day which saw several rivals fall by the wayside. By Andreas SOLARO (AFP)

Belgian Thierry Neuville led the way in his Hyundai after a battle royal on the unforgiving terrain of the Safari Rally in the Kenyan bush as rivals Sebastian Ogier, Elfyn Evans, Kalle Rovanpera and Dani Sordi endured a range of setbacks.

Seven-time world champion Ogier had won Thursday's opener but then lost ground as Neuville won the first two of the three morning stages on the southern shore of Lake Naivasha to take the lead from the Frenchman, who was slowed by the failure of his Toyota's left rear shock absorber.

"We learned a lot today," said Neuville. "We have to make use of that tomorrow and cut down on mistakes."

Ogier, in his last full season on the WRC circuit, agreed it had been a bumpy ride as he battled back from a broken rear suspension.

"They told us it would be hellish and we expected conditions to be delicate. But we didn't think it would be so tough right from the first day," he conceded.

"We just kept hanging in there in even more extreme afternoon conditions," said the veteran Frenchman as he saw Neuville pocket the sixth special and move out to an 18.8sec overnight lead over Toyota's Takamoto Katsuta.

Ogier pulled back some of the deficit after initially dropping to seventh to end the day in fourth with 1min 49.4sec to make up.

Wales' Elfyn Evans, who started the race second in the driver standings, was another to labour during the morning session, smashing the suspension on his Toyota Yaris and coming to a halt with his front right wheel hanging off.

"There was a stone that was sticking out more into the road than I had anticipated," the Welshman said.

"We clipped it with the front right wheel, and it was enough to break the suspension quite badly. There is no way to repair it or continue from here."

Spaniard Dani Sordo also went out after spinning his Hyundai into the undergrowth as the tough tight course of the sixth WRC race of the season tested even the most experienced rallyers.

"The only target was to not damage the car," Neuville said after winning the second stage.

"I was close to rolling the car a couple of times in the ruts. As we can see, we need to survive."

Opting for survival mode duly served its purpose as he rode with the punches while, overcoming two slow punctures in the morning and showing clean rear tyres on special stage six to stay out in front.

Kalle Rovanpera won two stages in his Toyota Yaris to move provisionally to 5.1 seconds off the lead, only to become stuck in the fine black 'fesh-fesh' sand in the day's closer.

"At the end of the stage, I had a puncture, and there was so much dust in the car I couldn't breathe," said Rovanpera. "It's Safari for sure."

Saturday will see six special timed stages and five more are slated for Sunday as Nairobi welcomes back WRC action for the first trime in two decades.