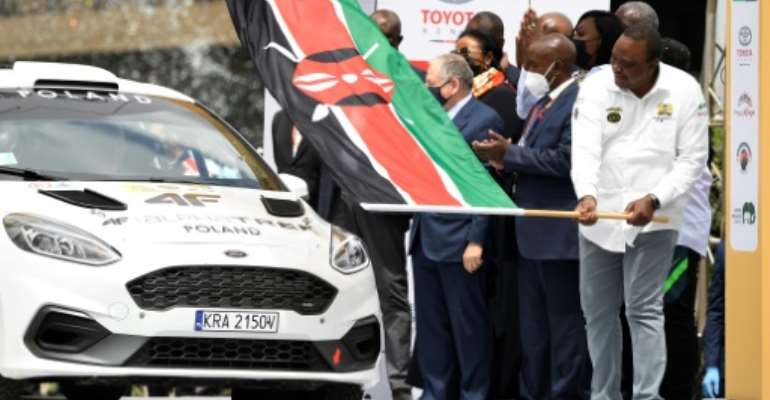 Silent for 19 years, the Safari Rally returned to Kenya on Thursday with thousands of fans gathering in Nairobi for the landmark moment in Africa.

Notorious for its rough and rugged rushes across savannah and escarpment, the race fell off the world circuit in 2002 due to concerns over safety, organisation and finances.

But on Thursday, thousands of supporters from across East Africa began arriving in the Kenyan capital from dawn, a full six hours before the competitors were flagged off by President Uhuru Kenyatta.

"I arrived very early because I didn't want to miss the cars," said Becky Kamau, who had pulled her 10-year-old son out of school to watch the event.

Many of the enthusiastic spectators, lining the city streets and waving flags, wore face masks.

"It doesn't concern me when we sit outside," said George Wamai, 53, referencing to being locked out of the flag-off venue because of social distancing measures.

"I have been a fan for long but have not been following (the championship) when it was discontinued. This return is such an achievement," said the retired civil servant.

Like him, many older fans waxed nostalgic, recalling the joy of roaring engines thundering through their neighbourhoods and villages, and fondly remembering the time they would get their hands dirty pushing rally cars out of the mud.

For a younger generation, it was a first-time experience, but one that held more promise even than races past.

"This is quite thrilling," said 22-year-old Samwel Mwangi. "I did not have the opportunity to view it back in the day, but with the development of technology, new routes and hybrid cars, it is a new experience for all."

At the opening 4.84km super special stage outside the Kasarani stadium, on Nairobi's northern outskirts, locals, eager to catch a glimpse of the cars, spilled over onto the course causing several drivers to be stopped from racing.

Ugandan spectator Thadeo Ssemanda said nothing could stop him travelling from Kampala to see the rally, leaving the country a week before it was placed under a lockdown.

"We sympathised with our Kenyan brothers when the Safari Rally was dropped from the World Rally Championship, but today we are happy that the event is back on the circuit," said Ssemanda.

The excitement was fitting for the return of a race predating Kenya's independence, with roots in imperial adventurism when a group of British colonial farmers decided, in 1953, to commemorate Queen Elizabeth II's coronation by tearing up East Africa in a five-day, 6,000-kilometre (3,300-mile) rally.

This year's edition will, however, be tamer than its predecessors which covered a total of 1,010km. The new format is closer to modern European rallies with 18 special stages totalling 320.19km.

Kenya's hospitality industry, which suffered a steep downturn as a result of the pandemic, is hoping to cash in with hotels bookings up in the lakeside town of Naivasha where most parts of the competition are being staged.

However, the government has banned the night-time revelries that were, in the past, synonymous with the Safari Rally's buccaneering spirit.