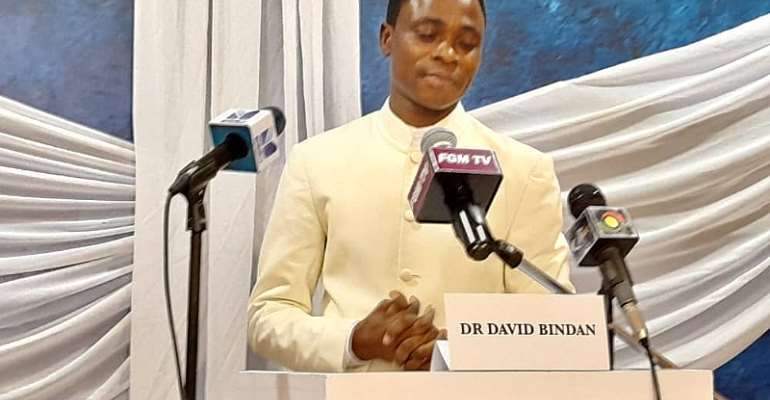 The Gborbu Wulomo-Shitse, Overlord of the Gadangme State, Wor-Lumor Konor Nuumo Borketey Laweh Tsuru XXXIll has issued a strong warning to the President of Final Global Government (FGM), Dr. David Bindan over his comments that the annual ban on noise making in Accra during the Homowo festival will end in 2022.

According to the preacher, he has placed a stop to the ban on noisemaking for churches in the spiritual realm so that they are not affected during the annual festivities of Homowo.

Dr. David Bindan who said he is speaking as the voice of the heavenly Kingdom of Jesus Christ indicated that after 2022, the ban on noise making will cease if churches are not excluded.

“It is that the annual ban on drumming and noise-making in the city of Accra which extends to affect activities in the Holy house of God, that is the Church of Jesus Christ, should be considered a thing of the past from today except it is reviewed to exclude effect in the house of God.

“I am speaking not on behalf of any organisation or group but as the voice of the heavenly Kingdom of Jesus Christ to the nations and for that matter, Ghana and the city,” the President of FGM shared.

In a statement from the Nungua Traditional Area, the Gborbu Wulomo-Shitse has expressed shock at the comments from the preacher.

The Overlord of the Gadangme State notes that his people appear to be on the receiving end of attacks by people keen on disrespecting their customs and traditions.

“The Gborbu Wulomo-Shitse is highly appalled by these comments of the claimed Man of God and thinks constant attacks, disrespect and insult to the traditions, customs and culture of the Gadangme people and its society are becoming one too many and must cease forthwith,” part of the statement from the office of the Gborbu Wulomo-Shitse reads.

The Wor-Bor Maawu notes that Gadangme people are a unique people in Sub-Saharan Africa and any attempt to alienate them will not wash.

The Overlord of the Gadangme State adds that the Gadangme land, being the host of the capital has suffered a host of setbacks but has diligently kept its pure and holy traditions and customs to this day and nothing will ever change this.

Find below the full press release from the office of the Gborbu Wulomo-Shitse:

‘We’ll go hungry if we stop light fishing’ – Fishermen in El...
28 minutes ago