The Ministry dispatched personnel to ask DCOP Opare-Addo why but he acted hostile, draw his sidearm – Kan Dapaah 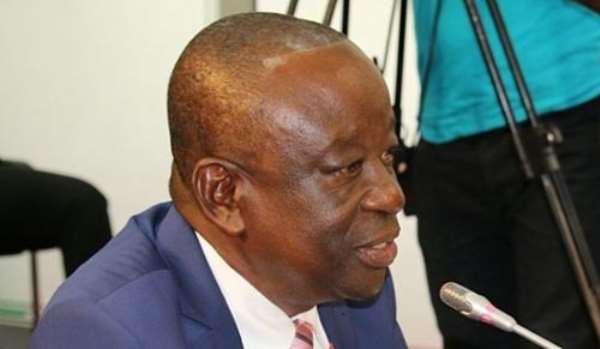 He said his men were dispatched to ask DCOP Opare-Addo (rtd) reasons for refusal to vacate office.

According to him, upon arrival, DCOP Opare-Addo (rtd) acted hostile towards his men and even drew his sidearm.

The sector Minister added that DCOP Opare-Addo (rtd) was overpowered by his men who legitimately applied force to remove him from office.

According to Kan Dapaah, the move became necessary after several attempts to get the security Coordinator to vacate post after the termination of his appointment proved futile.

Answering questions from South Dayi MP Rockson-Nelson Dafeamekpo on the floor of Parliament, the National Security Minister explained that the men dispatched were national security operatives and not pro-NPP vigilante group, Delta Force members as claimed by DCOP Opare-Addo (rtd).

He, however, refused to disclose reasons for the termination of the appointment of Mr. Opare-Addo insisting the use of force was necessary under the circumstances.

“He [Opare-Addo] was on a three-year contract to serve as the Ashanti regional security liaison officer after the expiration of an initial two-year contract which began on January 5th, 2018. His new appointment took effect from January 1, 2020, and was to expire on December 31, 2022.”

“However, his appointment was terminated on February 19, 2021, by the national security coordinator. Upon the termination of his contract, DCOP Opare-Addo was paid his entitlements as per his appointment letter. Subsequent to the termination of the appointment, the ministry appointed Col Francis Arthur (rtd) as the new Ashanti regional security liaison officer. The colonel’s appointment took effect from 1st May 2021. But he [Opare-Addo] refused to hand over to Colonel Francis Arthur. He then declined numerous invitations from the national security coordinator to explain his refusal to vacate the office.”

Mr Dapaah further explained “Meanwhile, his continuous stay in office obstructed the work of the new regional security liaison officer. Against this backdrop, personnel from the ministry of national security were on 11th May 2021 dispatched to the Ashanti region to ascertain the reason for DCOP Opare Addo’s refusal to vacate his office. And if it became necessary to change the locks of the door to his office. On arrival, the personnel duly introduced themselves but were met with acts of hostility from DCOP Opare-Addo, including drawing his sidearm. The personnel managed to persuade him and retrieved the sidearm.”

He added “till date, no official complaint has been made by DCOP Opare-Addo either to his immediate boss the national security coordinator or to me as the sector minister regarding the alleged assault on him. Neither has the minister of national security received any correspondence from the police in relation to the allegations.”

“I will want to assure the house of our willingness to investigate the incident should any official complaint be made by DCOP Opare-Addo.”