In Berlin, a glimpse of hope for Libya mercenary withdrawal 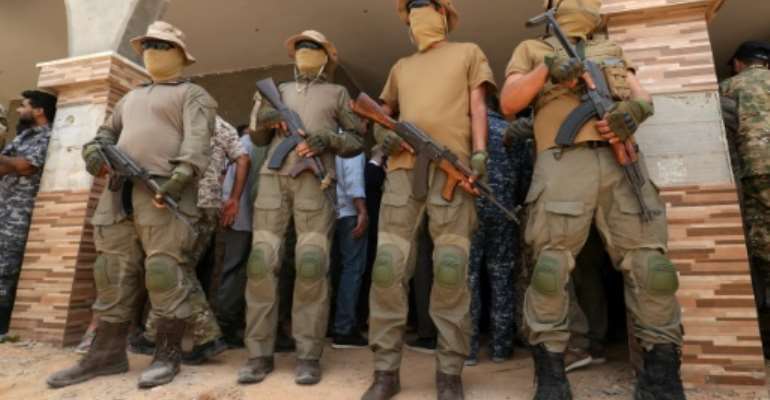 In October, Turkey-backed forces of the Government of National Accord (GNA) based in Tripoli routed those of eastern military strongman Khalifa Haftar. By Mahmud TURKIA (AFP/File)

Hopes grew Wednesday for Libya's stability following a decade of bloodshed as Russia and Turkey reached a tentative plan in talks in Berlin to start withdrawing foreign mercenaries, officials said.

The UN-sponsored conference -- the second held in the German capital -- renewed commitments to holding elections on December 24, a watershed for the North African nation where foreign powers have violently jostled for influence.

Libyan Foreign Minister Najla al-Mangoush voiced hope that there would finally be progress on a key pledge from the first conference in January 2020 -- to pull foreign fighters out.

"We have a progress in terms of mercenaries, so you know hopefully within coming days, mercenaries from both sides (are) going to be withdrawing and I think this is going to be encouraging," she told reporters.

US officials said that Turkey and Russia -- on opposite sides both in Libya and Syria -- were discussing a plan for each to pull out 300 Syrians fighting on opposite sides, a number that is small but would signal the start of a process.

They said details were still being worked out and "deep suspicions" remained but that the withdrawal plan came up on a trip last week by President Joe Biden, who met both his Russian and Turkish counterparts.

"There is a recognition even by some of these outside parties that if you could do some confidence-building measures that don't undermine the status quo militarily, they don't expose one side to an attack, let's try that,' a senior US official said.

"Our typically American pragmatic approach is 'let's go for the low-hanging fruit'."

The United Nations has estimated that 20,000 foreign fighters and mercenaries are still on Libyan territory. And that presence is seen as a threat to the UN-backed transition leading to the elections.

Clouding the talks, Turkey refuses to withdraw its military, saying its presence is different as it has an agreement with the internationally recognised government.

The previous conference drew heads of state but the latest meeting also gathered heavy hitters, with US Secretary of State Antony Blinken flying in as well as the foreign ministers of France, Turkey and Egypt.

Libya's interim Prime Minister Abdul Hamid Dbeibah promised to go ahead with the December 24 elections, although diplomats said he warned of logistical hurdles.

In October, after Turkey-backed forces of the Government of National Accord based in Tripoli routed those of eastern military strongman Khalifa Haftar, the two camps agreed a ceasefire in Geneva.

The security situation in Libya has been slowly improving since then. But Russian mercenaries supporting Haftar's side in the east of the country are still in place.

He noted that there is an understanding between the Turkish and Russian side that "when withdrawal begins, it will not be a short period of time when everyone will immediately pull back... but that it will be a step-by-step approach".

The fear is that an uneven and sudden withdrawal could leave a military imbalance that could be exploited by the other side for a sudden offensive.

The United Nations Under-Secretary-General for Political Affairs Rosemary DiCarlo also noted that the whole process "will take some time".

Nevertheless, Maas pledged that Germany and the UN will keep up efforts to ensure the departure of foreign militants.

"We will not rest until the last foreign force -- the soldiers and mercenaries, no matter where they come from... have left the country."