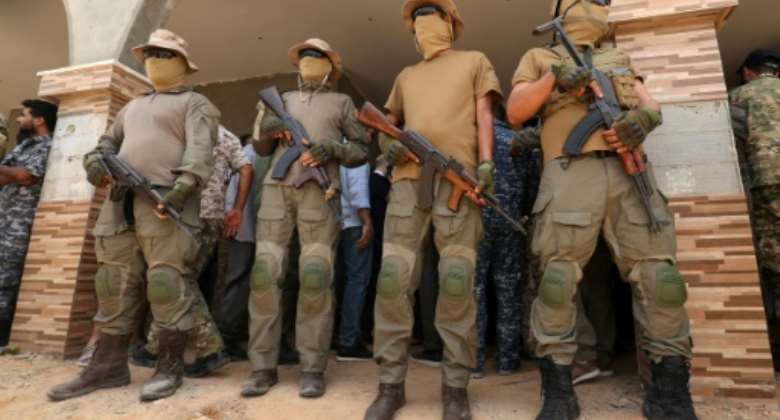 In October, Turkey-backed forces of the Government of National Accord (GNA) based in Tripoli routed those of eastern military strongman Khalifa Haftar. By Mahmud TURKIA (AFP/File)

World powers gathered Wednesday in Berlin to seek lasting peace in Libya by ensuring the conflict-wracked North African country stays firmly on the path towards general elections on December 24.

Representatives of Libya's interim government will join US Secretary of State Antony Blinken as well as the foreign ministers of France, Turkey and Egypt at the UN-sponsored talks.

Russia's Sergei Lavrov will be absent, but deputy foreign minister Sergey Vershinin will attend in his place.

The efforts to end a decade-long spiral of violence in Libya are the second round held in Berlin, after the first attended by the presidents of Turkey, Russia and France in January 2020, before the pandemic.

Ahead of the talks, host German Foreign Minister Heiko Maas reminded participants of pledges made in 2020 for an end to international meddling and for foreign militants or troops to withdraw.

The oil-rich country descended into chaos after dictator Moamer Kadhafi was toppled and killed in a 2011 NATO-backed uprising. By PATRICK BAZ (AFP/File)

"For the further stabilisation of the country, it is crucial that elections take place as planned and that foreign fighters and mercenaries really do leave Libya," Maas said ahead of the gathering.

"It is our aim to support the Libyan transitional government so that it can take the fate of the country into its own hands."

The United Nations has estimated that 20,000 foreign fighters and mercenaries are still on Libya's territory. And that presence is seen as a threat to the UN-backed transition leading to the elections.

However, the UN recently warned that progress has stalled, notably on a key requisite of the polls -- the pullout of all foreign soldiers.

But any withdrawal is also a delicate balancing act, said the German foreign minister.

"Foreign forces must leave the country in a gradual and uniform manner, so that there won't be a sudden military imbalance that could be used by one side for a sudden offensive," Maas told Die Welt newspaper.

A diplomat, speaking on condition of anonymity, stressed the sensitivity of the situation, saying solutions could not be found overnight.

But he also voiced cautious optimism that some progress could be made on Wednesday, because it was in no one's interest for conflict to break out again.

A first round of talks attended by the presidents of Turkey, Russia and France was held in January 2020, before the pandemic. By HANNIBAL HANSCHKE (POOL/AFP/File)

Jalel Harchaoui, Global Initiative senior fellow and an expert on Libya, also believed the talks could bring tangible help on the upcoming elections.