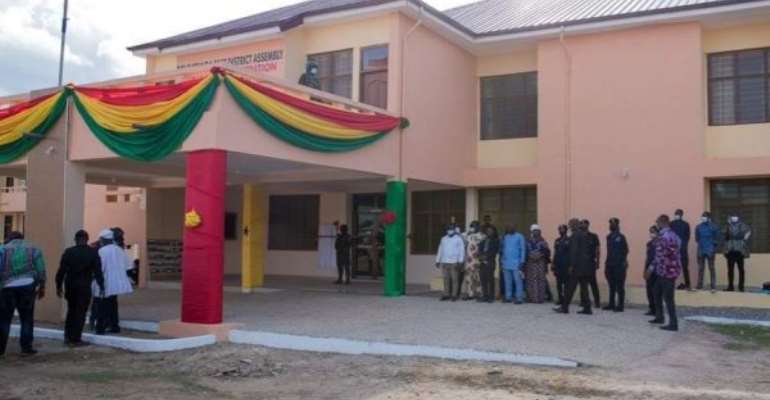 President Akufo-Addo says construction of the Bolgatanga-Bawku-Pulimakom road in the Upper East Region is near completion.

He said even though the condition of roads in the Region was not the best, there had been some improvement.

“I am happy to see that the Bolga-Bawku-Pulimakom road is now 80 percent complete and very soon, it will be 100 percent,” the President told the Paramount Chief of the Bawku Traditional Area, Naba Asigri Abugrago Azoka II, at his Palace.

“I know how dear the road is to your heart, and that is why I said to you that in my time, I will complete that road, am almost there,” President Akufo-Addo said.

The President, who was in the Bawku Naba's Palace to pay a courtesy call on him as part of his working visit to the Region, said work on the Bawku principal street and the highway by-pass would soon start.

He said the consultant would soon finish with the stakeholder engagement to pave way for the construction to commence.

“I want everybody to cooperate with the work that is going to be done to enable these developments to take place,” he said.

President Akufo-Addo said this on the backdrop of the Bawku Naba's appeal to him for a by-pass to be constructed to ease the heavy traffic in the town and also extend electricity to most parts of the traditional area.

Touching on the extension of electricity, President Akufo-Addo said the areas without it would be added to the Rural Electrification project.

Naba Azoka said: “We anticipate speedy implementation of this line of action as the rains have started already and we also continue to appeal for the continuation of the roads linking Bawku to Garu.”

He thanked the President for appointing distinguished personalities from the area to key positions in his government namely: Alhaji Sule Yiremia, as Member of the Council of State, and Mr Stephen Yakubu, Regional Minister.

“We are grateful for these appointments and still hope that other positions may be in the pipeline,” the Chief said.

The President, in the company of some key officials of his government including Mr Dominic Nitiwul, the Minister of Defence, Mr Ambrose Dery, Minister of the Interior, Mr Stephen Yakubu, the Upper East Regional Minister, Mr Abdulai Abanga, the Deputy Minister of Works and Housing, among others, later commissioned a District Assembly Complex at Zuarungu in the Bolgatanga East District.

He has since left the Upper East Region to continue his tour of the North East Region.