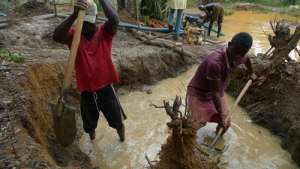 Illegal mining activities popularly known as 'galamsey' has resurfaced in the Kosane, Taforo, Kwakubadukrom and Yawbofokrom communities in the Dormaa Central Municipality of the Bono Region with a revised method of operation by miners.

The illegal miners are now executing their nation-wrecking activities at nights and this has compelled respective local authorities to devise new strategies to fight the menace.

Their activities however, came to a brief halt following the introduction of measures by Mr. Drissa Ouattara, the Municipal Chief Executive (MCE), which led to some arrests at Kwakubadukrom and Yawbofokrom, seizure of excavators and their subsequent prosecution in 2017.

Mr. Ouattara disclosed this when he was addressing the first ordinary meeting of the Municipal Assembly at Dormaa-Ahenkro, saying as part of recent initiatives to curb the menace, the Municipal Security Council (MUSEC) on Wednesday, April 21 this year visited Kosane and Taforo.

"We again visited Kosane and Taforo and I can tell you that these recalcitrant illegal miners have returned to site now by operating in the night", he said.

The DCE pleaded with chiefs and the youth in those communities to help the MUSEC to stop the illegal mining activities, saying that, "the land at Kosane and Taforo have been destroyed beyond imagination and it will cost millions of Cedis to be able to reclaim it".

On sand winning, Mr. Quattara said even though sand winning was sufficiently captured in the Assembly's bye-laws to be regulated, compliance and enforcement have been very difficult because efforts to engage stakeholders to enforce operational standards and to monitor their activities have proved futile.

He nevertheless, assured sand winners that the Assembly would do everything within its mandate to regulate their operations.

He said he was not against cutting of lumber for construction and other useful purposes, but if anyone wanted to engage in lumber business, one must go for the necessary documentations to obtain a concession.

Mr. Ouattara therefore appealed to timber constructors working in the Municipality to fulfil their legal obligations by retaining 30 per cent lumber for the local market.

He said Osagyefo Oseadeeyo Agyeman Badu II, the Paramount Chief of Dormaa Traditional Area and Madam Justina Owusu-Banahene, the Bono Regional Minister recently went to ascertain the level of destruction of the 'Mpameso' forest reserve, saying they were shocked and very disappointed and subsequently instituted measures to stop that impunity.