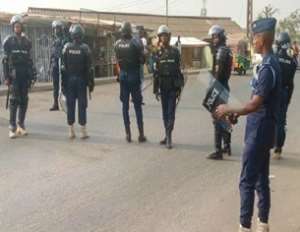 Analysis of data from a national survey of police officers found two-thirds experienced Coronavirus-induced psychological distress and sleep problems; some officers were found to have contemplated suicide.

The research, which tracked the mental health and psychological wellbeing of police officers during the Covid-19 pandemic, was conducted by Dr Samuel Adjorlolo (University of Ghana, Legon) and Dr Justice Tankebe (University of Cambridge, UK), and funded by the Cambridge-Africa Alborada Fund. The findings were presented at a stakeholder workshop held at the University of Ghana’s Cedi Conference Room on June 18, 2021.

The researchers analysed two waves of data collected from an online survey of police officers. The first wave comprised 158 officers who completed the survey between July and August 2020. A total of 110 of these officers completed the same survey again between November 2020 and March 2021. The researchers said the follow-up survey was important as it allowed them to track changes in the mental wellbeing of the officers.

Of the officers surveyed in first wave, 71.2% reported feelings of depression due to the Covid-19 pandemic. By March 2021, the proportion of officers experiencing depression had reduced to 61.8%, indicating an improvement in the psychological wellbeing of the officers. Between 72.5% (second wave) and 83.7% (first wave) of officers indicated they constantly worried about the pandemic.

The Covid-19 pandemic has been known in other countries to induce sleep problems, a phenomenon described as ‘coronasomnia’. Among the Ghanaian police officers initially studied, 60.3% said they had difficulty falling asleep while 62.6% reported having difficulty staying asleep. When they were re-surveyed, the figures had reduced to 48.5% and 55.4%, respectively.

The psychological distress and sleep-related problems affected the job performance of the officers. Eight in ten officers – 80.5% – reported a negative impact on their productivity levels during the first wave of the study; by March 2021, the proportion of officers reporting this negative impact of Covid-19 on productivity had declined to 66.3%. The researchers also found a negative impact on the emotional state of officers: between 59.8% (wave 2) and 66.5% (wave 1) of officers reported feeling angry about having to go to work. The data also showed that about four in ten officers considered leaving the police service due to the pandemic.

Suicide by police officers has received public attention in recent years. The researchers found six of the officers – approximately 4% of those studied – contemplated suicide due to the coronavirus-induced psychological distress they experienced.

The researchers said the findings had important implications that required the immediate attention of the Ghana Police Service and the Ministry of Interior. They argued for urgent measures to enhance support for officers during this period of Covid-19 pandemic. In fact, two-thirds of the officers surveyed said they ‘definitely’ or ‘probably’ needed psychological support. The majority indicated a preference to receive this support through telephone or an online platform – for example, WhatsApp video calls.

The researchers also argued for a national strategy on the psychological wellbeing of officers in Ghana. According to them, the work of police officers places them at daily risk of exposure to various psychological hazards and that a national strategy can help provide guidance and resources to provide immediate and long-term support for officers. Such support, the researchers argued, should be viewed as an obligation the state owed police officers for the critical role they performed in society. They also pointed to evidence from other countries that linked the psychological distress of officers to poor decisions, such as the use of deadly force, during interactions with citizens.