By Robin Millard with Susan Njanji in Johannesburg 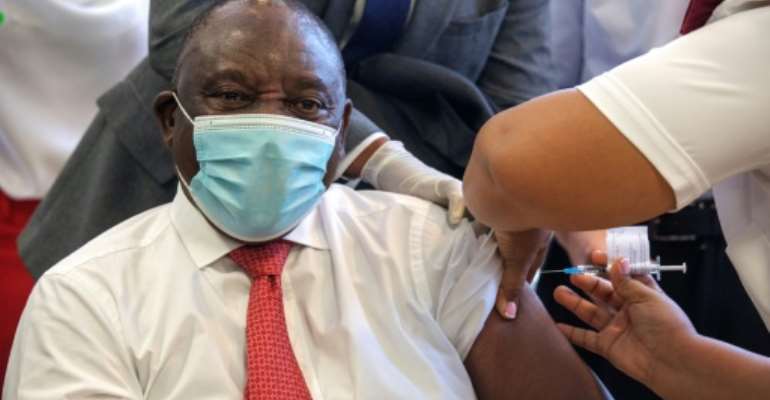 But as the project will take time to get off the ground, no vaccines are expected from it until next year.

At tech transfer hubs, the technology is established at industrial scale, while interested manufacturers can receive training and any necessary licences to the technology.

"The ability to manufacture vaccines, medicines and other health-related commodities will help to put Africa on a path to self-determination," Ramaphosa told a WHO virtual press conference via video-link.

"It's been shown now that we just cannot continue to rely on vaccines that are made outside of Africa because they never come. They never arrive on time and people continue to die."

The hub is seen by the Geneva-based WHO as a way to combat the vast inequality in access to vaccines between the world's wealthiest and poorest nations.

WHO chief scientist Soumya Swaminathan said it could take nine to 12 months before Covid-19 vaccines could be produced in South Africa using tested and approved processes.

Under the tech transfer hub system, the WHO and its partners bring in the production know-how, quality control and necessary licences to enable a rapid roll-out.

At the South African hub, the bio-pharmaceutical company Biovac will act as developer; the Afrigen biotechnology firm will be the manufacturer; and a consortium of universities will provide the scientific know-how.

Messenger RNA genetic technology -- as used in the Pfizer-BioNTech and Moderna coronavirus jabs -- trains the body to reproduce spike proteins similar to those found on the coronavirus. When exposed to the real virus later, the body recognises the spike proteins and is able to fight them off.

The WHO said it would "continue its assessment of potential mRNA technology donors and will launch subsequent calls for other technologies, such as viral vectors and proteins, in coming months".

During a visit to South Africa last month, Macron said he was pushing for the faster transfer of technology to allow poorer countries to start manufacturing their own Covid-19 jabs.

It was a "great day for Africa", said Macron.

"Each continent must be able to develop and produce its own vaccines, its own medicines," he added.

South Africa accounts for more than 35 percent of Africa's total recorded Covid-19 cases, and is currently suffering a third wave of infections.

South Africa, along with India, has been pushing for a temporary waiver of vaccines' intellectual property rights in order to speed up production.

More than 2.6 billion doses of Covid-19 vaccines have been injected in at least 216 territories around the world, according to an AFP count.

In the highest-income countries, accounting for 16 percent of the global population, 74 doses have been injected per 100 inhabitants.

That figure stands at just three doses per 100 people in Africa.