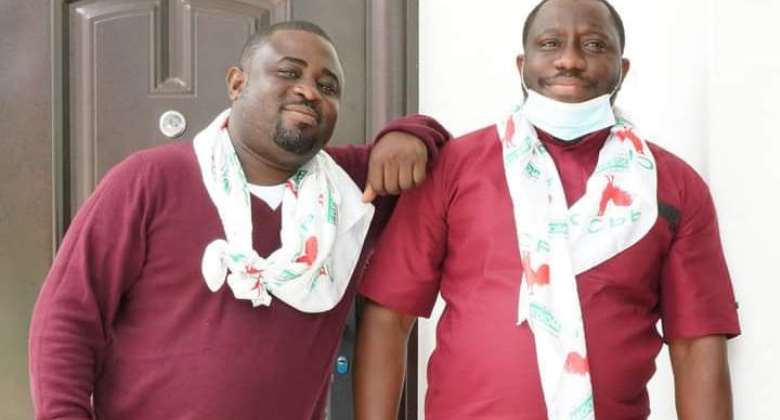 The two organizers of the Convention Peoples Party (CPP), the National Organizer and the National Youth Organizer, Comrade Yirimambo Moses Ambing and comrade Osei Kofi Acquah respectively have taken a swipe at the dismissed former youth organizer for the party Ernesto Yeboah for recent comment against the party.

Ernesto Yeboah is reported to have said the current CPP is not the original CPP left behind by the Founder Osagyefo Dr. Kwame Nkrumah.

According to comrade Yirimambo, the behavior of Ernesto Yeboah is like that of a baby who cannot stop crying over spilt milk.

He says Ernesto Yeboah who caused his own dismissal by flaunting the party's constitution, still cannot come to terms with the reality that, no matter how he tries to portray himself as a Nkrumaist, that position can only be justified if he was still a member of the party Osagyefo Dr Kwame founded.

Explaining this further, the National Youth Organizer elaborated that, there are certain unique features that make a political party.

He continued that today's CPP is the same party formed by the Osagyefo Dr Kwame Nkrumah.

He said the first CPP has its first colours namely, Red, White and Green.

He also remarked that the current CPP still has the red Cockrell like the one Osagyefo Dr Kwame Nkrumah and his comrades used in 1949.

Comrade Osei Kofi Acquah stressed that the current party constitution clearly defines the current CPP, by stating on authority as a political party that believes in the ideology and vision of the Osagyefo Dr Kwame Nkrumah.

Comrade Yirimambo quizzes Ernesto if he is aware of the Supreme Court ruling that restored the CPP after its unfortunate overthrow in 1966.

According to him, what Ernesto is saying is pure ignorance and an act of hypocrisy.

Comrade Osei Kofi Acquah insisted that the youth in the CPP today have been conscientized with the ideology of Nkrumaism.

He added that the current National CPP executives are committed to increasing the fortunes of the CPP, indicating that a detailed grassroot organizational plan has been tabled before the Central Committee pending approval and execution.