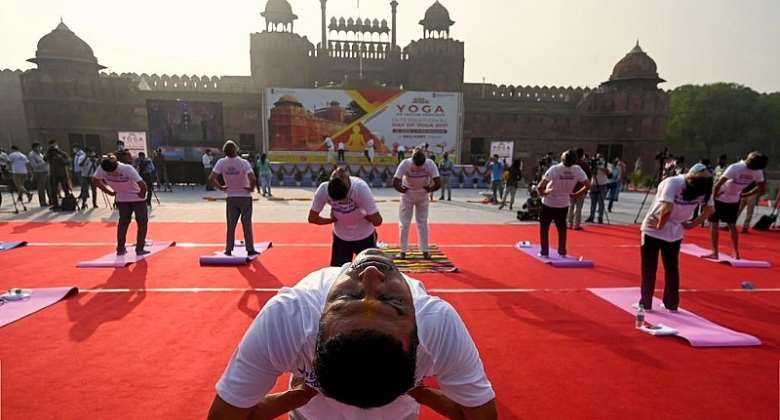 India has promised free Covid shots to all adults from Monday as states set new goals for their vaccination campaigns to mark International Yoga Day. The offers came as coronavirus infections neared 30 million with 388,135 deaths and warnings of a new virus surge within weeks.

India posted 53,256 new cases and 1,422 coronavirus deaths in the 24 hours to Monday while many of its 28 states vowed to pump up their faltering vaccine rollout to mark the seventh International Yoga Day.

"In these tough times, we all saw that Yoga became a huge source of self-confidence," Indian Prime Minister Narendra Modi said in a national broadcast. “Frontline warriors told me that they made Yoga a tool in fighting the virus."

Monday also saw Modi's federal government take back control of vaccine supply to the states to accelerate the drive to immunise all adults against coronavirus free-of-cost.

Earlier, it had put different price tags on vaccines and stipulated states must procure their own which led to confusion and shortages.

India has so far given 280 million jabs since launching the drive on 16 January.

Some five percent of the people have been fully vaccinated but the government says it aims to vaccinate the country's nearly 1.1 billion adults by the end of the year.

Andhra Pradesh set a national record by administering over 1.3 million vaccine doses in the 24 hours to Monday, the southern Indian state announced.

Private hospitals were permitted to charge for vaccine doses from citizens willing to pay upfront.

The authorities put the programme into overdrive following the huge blow to India's health services during a savage virus surge that killed more than 180,000 people in April and May.

Medical experts have warned a third wave could be just around the corner.

“It could happen in about six to eight weeks, maybe a little longer,” said Randeep Guleria, who heads a national Covid taskforce.

“A lot depends on how we go ahead in terms of Covid appropriate behaviour and preventing crowds,” added Guleria who is also the director of India's largest public hospital in capital Delhi.

The warning came as Telangana state lifted all virus restrictions while crowds were spotted in public in Delhi, Mumbai and Kolkata as cities argued lockdowns would kill livelihood.

Even a national media club in Delhi resumed full services from Monday despite some apprehensions.

“The bigger challenge we think will confront us over the next few months is that there is a lot of vaccine hesitancy or, if I can say so, vaccine paranoia in rural India,” said T.V. Narendran, who head India's largest business lobby, on television.

“Unless we address that, you will reach a situation very quickly in two to three months where you will have a lot of vaccine but not enough people willing to be vaccinated."

Images of villagers jumping into rivers at the sight of approaching vaccinators or chasing them away have dumbfounded community health planners.

World's first amputee Everest climber Arunima Sinha is among several others who have joined a campaign to try and end vaccine hesitancy India.